British Columbia has a well-established history of unpredictable politics. From the 20-year reign of “Wacky” Bennett, the antics of Bill Vander Zalm, the rotating door of NDP Premiers in the 1990s, Gordon Campbell’s drunk-driving conviction, to the infamous Legislature wood splitter, there is rarely a shortage of political intrigue and scandal in British Columbia.

We asked two members of our Vancouver Public Affairs team, from different political backgrounds, to share their thoughts on some of the biggest questions to start 2020. Jeff Ferrier is the Public Affairs Lead in Vancouver, an experienced progressive politics campaigner and senior advisor to NDP leader John Horgan during the 2017 election campaign. Matt MacInnis was a political staffer for the B.C. Liberal Government from 2005 to 2012.

The top question has to be whether or not there will be a provincial election in 2020?

MM: I don’t see it happening. The NDP has essentially operated like a majority government since summer 2017, so I don’t see why it would risk going to the polls before October 2021. Especially with the Greens in flux until summer 2020, and possibly ending up with a leader who doesn’t have a seat in the Legislature, I can’t see the Greens breaking the Confidence and Supply Agreement, nor the NDP orchestrating its own confidence vote demise. Also, with Budget 2020 expected to be running pretty tight to balance, the NDP may want more time to strengthen its fiscal performance.

JF: Probably not. The New Democrats have only been in power for 2.5 years after 16 years of waiting, and no one knows better than them that the worst day in government is better than the best day in opposition. But I can see why everyone is talking. Premier John Horgan’s popularity has reached heights not seen since the best days of Gordon Campbell. Budgets are balanced, the economy is chugging along (mostly) fine. The NDP is performing well on healthcare, education and affordability (cf. empty homes tax, MSP premium elimination and child care). Opposition leader Andrew Wilkinson still hasn’t found his footing with voters. Andrew Weaver’s departure has left a big leadership hole with the B.C. Greens, with a potentially divisive leadership race coming up. If you’re going to call an early election, why not do it now?

The NDP is performing well on many files, and Premier John Horgan’s popularity is higher than ever. Photo credit: Province of British Columbia.

What will be the dominant B.C. politics story of 2020?

JF: It’s the economy. Lagging global growth, strained Canada-China trade relations, conflict in the Middle East and an unpredictable U.S. presidential election all pose material risks to B.C.’s economy and balance sheet. If the NDP has any shot at forming a future majority government, it is going to need to steer B.C. through what’s shaping up to be a tumultuous year. If the NDP can keep the economy strong, grow provincial revenues, keep budgets balanced, and maintain investments in programs that improve cost of living and quality of life for British Columbians, a majority government is within reach. Drop the ball on any of this and say hello to Premier Andrew Wilkinson.

MM: I’m going to say ICBC. Crown Corporations in B.C. have a way of becoming politically contentious. The NDP was very effective attacking the B.C. Liberals on the file in the lead-up and immediate aftermath of the 2017 election, but it’s been 2.5 years of NDP reign, and I’m not confident the public is any happier with the job they’ve done. The B.C. Supreme Court’s decision against the Government’s attempt to limit expert reports will reportedly have a $400 million hit to the 2020 provincial budget, and it seems likely rates are going to continue to increase.

Premier Horgan recently alluded to an upcoming Cabinet shuffle. What do you expect him to do?

JF: Premier Horgan is like the general manager of an NHL team at the trade deadline. His focus needs to be on his playoffs—the provincial election. If I’m him, I’m taking a go-for-it mentality. He’s got a solid base with Carole James in Finance, Adrian Dix in Health, Selina Robinson in Municipal Affairs and Housing, Rob Fleming in Education and Mike Farnworth as the bruising House Leader. I expect the premier to surround his core with rising stars like Ravi Kahlon and Bowinn Ma. They project a younger, energetic face for the party. There is also an opportunity for depth performers like Surrey’s Rachna Singh and Nanaimo’s Sheila Malcolmson. They could benefit from a profile boost in their swing seats. As with hockey, it’s hard to acquire talent without giving some up. For veterans like Jinny Sims, and perhaps Shane Simpson and Scott Fraser, that could mean diminished roles.

MM: If the RCMP investigation into Citizens’ Services Minister Jinny Sims hasn’t concluded, she will need to be removed from Cabinet, creating at least one opening. The Ministry isn’t seen as a key portfolio, but I can tell you from my time as a political aide in the file that it’s a more difficult role than it appears from the outside. I’d recommend against appointing a first-time minister to the role (because I think understanding the inner mechanics of government from sitting at the Cabinet table helps a lot), but I suspect we’ll see Rachna Singh or Bowinn Ma get the promotion.

Forests, Lands, Natural Resource Operations and Rural Development Minister Doug Donaldson appears to be on shaky ground, and the appointment of Ravi Kahlon as Parliamentary Secretary last year makes that a logical transition.

Other decisions will likely be based on which veteran ministers inform Premier Horgan that they won’t be running again.

JF: It’s energy. In 2020, energy will be the focal point for three significant B.C. Government undertakings: the CleanBC climate change plan, the B.C. Declaration on the Rights of Indigenous Peoples Act, and private sector commitments to historic investments in B.C.’s energy sector. Advancing investment in LNG while meeting climate targets and supporting Indigenous peoples’ right to pursue self-determined development will be a huge challenge. If we get it right—and knowing the parties involved I’m confident we will—B.C. could be a model for sustainable development for the whole country. But it won’t be easy.

MM: As a Northern Vancouver Islander, I’m contractually obligated to say that the forest industry crisis is B.C.’s biggest issue. Reports from forest section-dependent communities are pretty dire right now. I’m less confident about whether it will materially matter in the next election. Although there are exceptions (including my hometown North Island riding), most areas hardest hit by the sector’s downturn are in fairly safe B.C. Liberal ridings, and I’m not sure it’ll be a ballot box decision for many in the Lower Mainland. 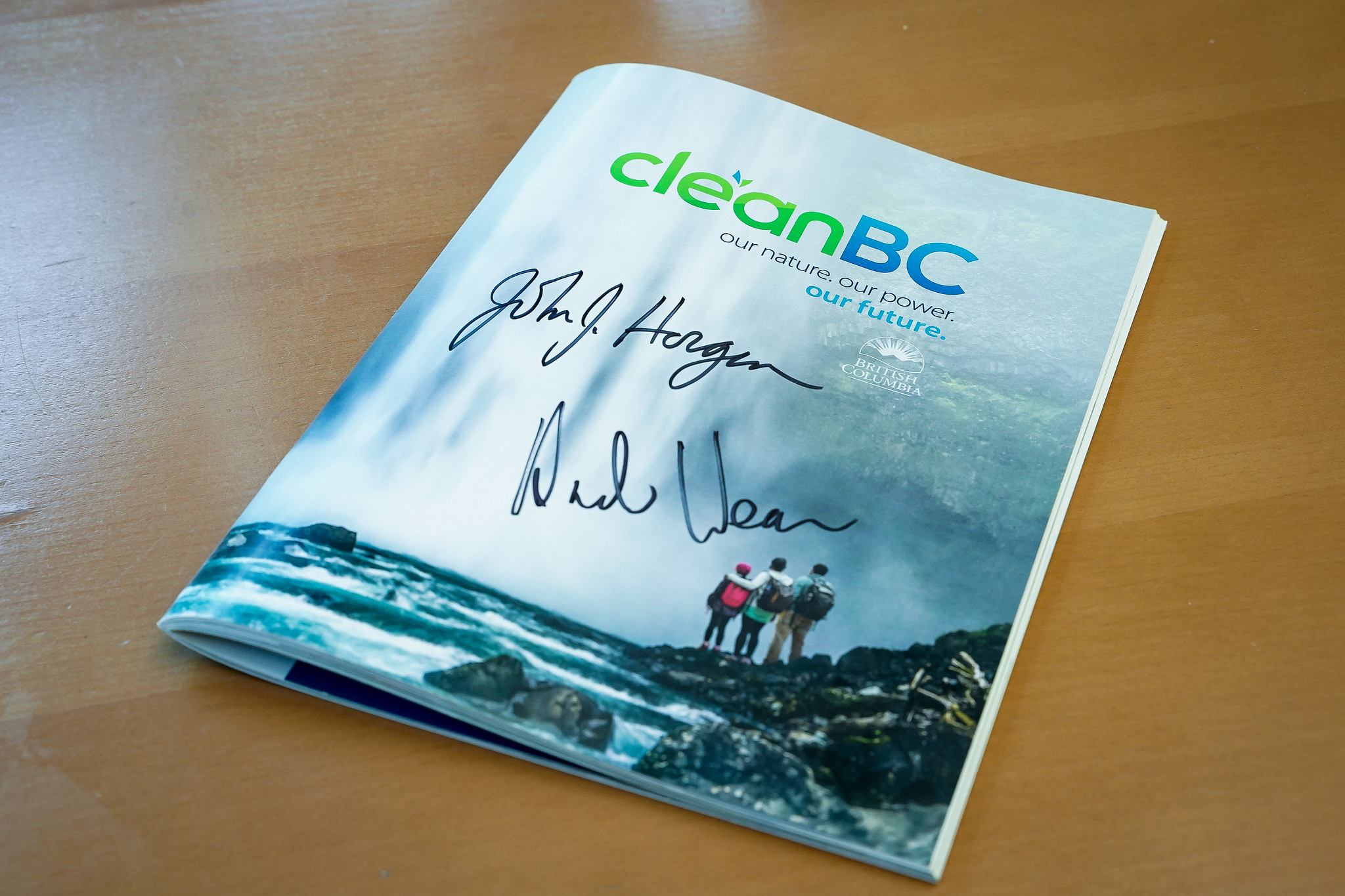 Energy will be the focal point of multiple undertakings, including the CleanBC climate change plan. Photo credit: Province of British Columbia.

JF: The B.C. Liberals seem stuck in the past. They remind me of last year’s Anaheim Ducks—a once great hockey team (remember 2006-2007?), with no coach and no direction (so long Randy Carlyle), too much capital invested in over-the-hill players (hello there Ryan Kesler), and attendance on the downswing (you know it’s bad when you’re behind Columbus). Andrew Wilkinson desperately needs to articulate a new, forward-looking vision for the party. He needs a new chief of staff (Wilkinson hasn’t named a replacement for the one he fired in December). He also needs new talent in his caucus. This may mean some tough decisions on caucus stalwarts like Rich Coleman, Shirley Bond and Mike de Jong. Each one is undeniably very capable and popular in their constituency. The issue is how they personify the unpopular old ways to the broader electorate. To Mr. Wilkinson’s credit, he has taken some initial steps towards renewal, but much more remains to be accomplished.

MM: The B.C. Liberals have the opportunity to reinvigorate their base, but I don’t think they need to dramatically shift direction.

Former leader Christy Clark, who single-handedly won the 2013 election but was divisive in 2017, is gone. Current leader Andrew Wilkinson started from a good position for an Opposition leader: the B.C. Liberals won the most seats in the previous election, and the last time the NDP earned the most votes in a provincial election was 1991. Support for the party is pretty solid.

My advice: identify and focus on a small number of issues that directly impact people and shore up key areas of perceived weakness from the previous campaign (such as housing, childcare and environment). Personally, I’d focus on reclaiming ground on the environment. This issue may have been seen as niche in the past, but with increasingly volatile weather patterns, extreme fires domestically and internationally, and heightened awareness thanks in part to activists including Greta Thunberg, that’s no longer the case. A strong environmental platform should be considered core policy for any party looking to lead.

Gold is back: How can issuers differentiate themselves?
January 09, 2020