The challenge of representing various topics from coast to coast is that a single thing cannot encompass all regions. Thankfully, this image in the style of Hokusai’s The Great Wave serves the purpose of depicting the next big thing, what’s to come. You’ll notice that the waves follow a pattern resembling market graphs. Throughout all of our offices, experts have already been analyzing market trends, major events, and political changes. All that is left is for 2023 to finally start.

Here are the trends our Managing Partners see for their region in 2023:

Change is afoot in Canada’s two western most provinces.

We have new Premiers in British Columbia (BC) and Alberta. In the last few weeks both have announced new cabinets, priorities, and legislative agendas prior to elections in the near term.

Alberta expects to see a general provincial election in May 2023. In BC the election is scheduled for the fall of 2024, but there is emerging speculation the recently appointed cabinet could be geared for an early vote next fall.

We continue to hear a wide range of opinions out there on what these new premiers “need” to do from all angles. Ultimately the technology, natural resources, and energy industries that drive these provincial economies thrive on understanding the policy environment in which they operate to make their investment and hiring decisions.

Governments must balance this with the public calls to address healthcare, affordability, and housing concerns and making visible progress prior to election day.

Our clients will do well to get to know their government and, more importantly, have them know you and your plans early.

The new Legault government to be followed closely

Within François Legault's new government, Pierre Fitzgibbon, the super minister of the Economy and minister responsible for Montreal, promises to "properly represent" the region around the cabinet table. His plans for the metropolis focus on innovation and a chain of value creation. Through newly formed innovation zones, the government intends to continue to provide Quebec with fruitful business opportunities in industries of the future. Montreal's place in this major mobilizing project is to be seen in 2023.

Economic issues at the centre of the coming year

Inflationary pressures on businesses and households and difficulties in supply chains are certainly economic issues to watch in the new year.

In Montreal, mobility issues are at the top of the agenda. To support the consolidation and development of downtown business, various municipal and regional players are focusing on innovative strategies for a strong and resilient downtown. In addition, environmental and green energy issues will be on the agenda more than ever.

Setting an example to halt the decline of French in Quebec

In 2022, the Government of Québec passed Bill 96, “Loi sur la langue officielle et commune du Québec, le français”, which amends the Charter of the French Language (Bill 101) to strengthen the latter by defining the only official language of Québec.

While the amendments affect all businesses and organizations that operate or have employees in Quebec, the changes also extend the reach of language laws to areas of federal jurisdiction that were previously exempt from the Charter. Businesses with at least 25 employees will have to register and obtain a francization certificate from the Office québécois de la langue française (OQLF), failing which they will be subject to penalties... and damage to their reputation!

The government will not hesitate to denounce the poor performers, aware that it has everything to gain by defending French. For any organization that wants to position itself effectively in Quebec or convince the government to fund its projects, it will have to be exemplary in the way it conducts its business and stand out. Otherwise, there is a risk that your goodwill will vanish in less time than it takes to say, "Bonjour! Hi!"

Population growth is changing the region

The most significant trend in Atlantic Canada is captured in one chart: 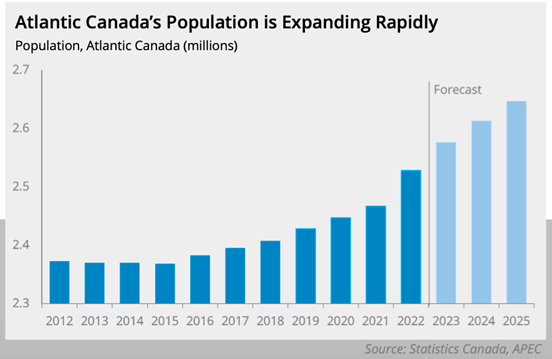 The upside of this growth is huge. Greater density and diversity build innovative economies. Indeed, Atlantic Canada was listed recently as one of the top five Blue Economy ecosystems in North America. Confidence in a growing region buoys investment decisions by businesses and governments alike, and people are choosing to be here.

The downsides are problems that are shared beyond our borders. Housing and healthcare systems haven’t caught up to current and projected needs, and we lack the infrastructure, processes, and transit systems to support this growth. As the oldest population in Canada, labour shortages in every sector are severely felt. Long a region of less distributed wealth than denser regions, inflation will likely hit harder in 2023.

The chart above challenges to ask critical questions: What must we do to meet this potential and retain the momentum? Will our recent population gain whither in a coming recession? What do we do to manage this change well and create the sense of belonging and opportunity that will keep people here, including marginalized groups?

The new story on population in Atlantic Canada is as fragile as it is significant.

The emergence of “purple” pragmatism in Ontario? Delivering political results in uncertain times

Rising interest rates. Ongoing concerns regarding inflation and the impact on families. Domestic and global supply chain issues. And a looming recession on the horizon.

Sound like the backdrop for more jurisdictional bickering? Or the strategic context for deeply partisan arguments along traditional “red” and “blue” lines?

Hardly. Canadian voters—in Ontario and otherwise—are quite rightly fatigued by circular political debates about policies and programs that impact their families.

Ontarians had a federal election in September 2021; a provincial election in June 2022; municipal elections in the fall of 2022. Will Ontario members of Parliament and members of Provincial Parliament be accurately deciphering the messages sent by voters? Will politicians truly take note and “actively listen”?

At NATIONAL, we are keeping a close eye on where federal Liberal and provincial Conservative collaboration will emerge in Ontario in 2023, including where big city mayors will be focused. Where red and blue perspectives ideally combine for tangible measures and, yes, “purple” results for voters.

As my (fantastic) NATIONAL colleagues have highlighted, there are multiple public affairs trends to watch closely in the new year. Economic and intergovernmental challenges will unavoidably be at the nexus point of major choices by the Trudeau and Ford governments.

Exhibit A? Healthcare. There were multiple territorial squabbles between federal and provincial stakeholders on health funding in 2022, including during the October 2022 meeting of health ministers in Vancouver. Whether they will admit it or not, health and finance ministers from each jurisdiction know full well that Canadians don't focus on the percentage of federal versus provincial funding for our universal healthcare system.

This is where common political ground will be found between Ottawa and the provinces. And perhaps like the childcare agreements signed in 2021—not coincidentally, just before a federal election—this is where political pragmatism may emerge. And where politicians may hear a common theme from voters: just sit down, agree on the numbers, and nail down a deal.

Furthermore, and again similar to the childcare deals between Ottawa and provinces, we could also see a series of one-off “deals” on health funding with single provinces, all with different nuances. A single comprehensive “accord” with all provinces and territories may be a political bridge too far. Ottawa may instead focus primarily on finding common ground with the three provinces that hold the cards to the re-election of the federal Liberals—Ontario, Quebec, and B.C.—as early as possible in 2023.

The Ford and Trudeau governments are in different stages of their tenure. The Premier just won another four-year majority, whereas the Prime Minister, on his third term already, is operating from a (relatively) stable agreement with the New Democratic Party.

While they share little in common politically, both governments have shown a rare ability to find common cause on big-ticket items. For example, shared funding for new EV manufacturing facilities in Ontario in December, and an October 2022 deal to bring a major 5G $340M investment to Ottawa. They also showed multiple times through the pandemic that they could put differences aside to focus on results.

Look for major infrastructure projects and other major shared “political wins” in 2023. All through the lens of shared interests, agreeing when it’s politically convenient, and sensing when a deal can be locked down.

Political expediency works. Voters know it—and need more of it. While political sparring between Ottawa and Queen’s Park is inevitable, with potential economic turbulence ahead this year, look for both governments to find the pragmatic “middle” in 2023 more often than not.