Three days after the 2019 Canadian federal election, NATIONAL and McCarthy Tétrault surveyed 2,100 Canadian voters to better understand the factors that shaped their vote, including how they viewed key moments of the election. In tandem with our analysis of the survey data, we analyzed Google search volume trends for election-related terms and 2.1 million tweets tagged with #ELXN43. Combining survey and online conversation analysis enabled us to corroborate findings and uncover interesting results about what drove the vote in 2019.

In the weeks that followed the election, NATIONAL and McCarthy Tétrault took these survey and digital insight findings on a cross-Canada road show, starting in Vancouver, and moving eastward to Calgary, Toronto, and Montreal. We also added presentations to interested audiences in New York City and London, England. In this blog post, we are highlighting three surprising findings that reveal key insights from our research.

The revelation that Justin Trudeau appeared in brownface on more than one occasion in the past certainly shocked and offended many Canadians. But how important was it to their voting decisions? Both our survey and search analysis indicate: not very. Of the 2,100 Canadians surveyed, only 11 per cent reported that it mattered a great deal to their vote, while 50 per cent indicated that it was of no importance at all.

Analysis of Canadian Google search volume trends shows a clear spike in search terms related to brownface around the time the story broke in the mainstream media, but a clear leveling off in the days following. It appears that the images from Trudeau’s past were not especially consequential to the vote of most Canadians. 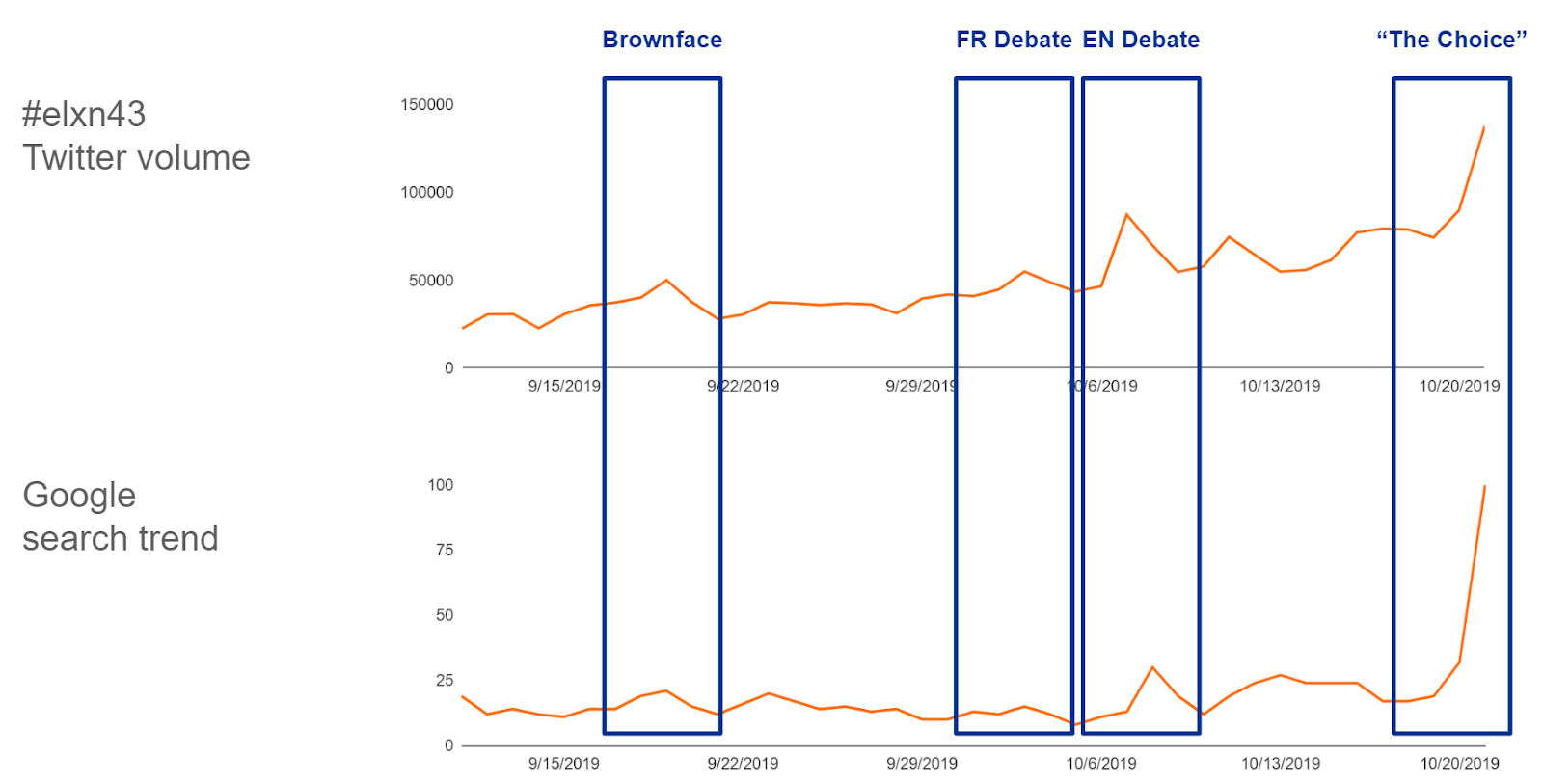 This image shows when election interest spiked in the month preceding the election in Twitter and Google searches.

As television audiences continue to fragment, there has been speculation that real-time “event” viewing, like televised political debates, will become less important to national election narratives. This has led to a great deal of discussion about whether political debates still matter, and if so, how much? Our research suggests that it may be premature to write the obituary for these face-offs. As part of a battery of survey questions about key election moments, we asked participants about the extent to which the first English-language debate, and the first French-language debate, may have factored into their voting decisions. We also correlated these two events (October 7 and October 2, respectively) with online searches and interest.

If you are someone who believes “debates are dead”, the results may surprise you. Across all respondents, nearly 60 per cent reported that the debates mattered at least a little to their vote—and this number was even higher among French-speaking respondents in relation to the French-language leader’s debate (66 per cent). What’s more, the online search analysis and Twitter volume trends supported this pattern—each showed noticeable spikes in activity around the time of every debate. It is our view that debates remain important opportunities for voters to learn about—and discuss—key issues and to help make informed voting decisions.

Anyone with a smartphone knows that election news was practically unavoidable on the Internet and social media. Without question, it is one of the leading ways for Canadians to get news about the election, with 31 per cent calling online and/or social media their primary news source. Traditional media, however, still plays a prominent role in how Canadians consume election news. Among our respondents, about half got news related to the election primarily through television. Perhaps unsurprisingly, this number was significantly higher for those 60 years old and over, at 63 per cent. The implication for campaigns wishing to reach higher-turnout boomers and seniors is that media buys that do not include traditional media like radio and TV are missing out on potential audience.

Federal election 2019 reflects Canada at a technological crossroads of sorts. We noticed behaviours that show Canadian voters taking to online resources—immediately—to research and discuss issues that were topical in the news. Although online forums play an increasingly important role in how Canadians learn about and discuss issues, political debates and traditional media continue to have prominence. By combining survey and digital search data analysis, we developed a robust understanding of how Canadian voters approached #ELXN43, and uncovered a few surprises along the way.

NATIONAL’s robust research, insights, and data analytics practice is a critical part of our client service offering. Visit us to learn how NATIONAL’s research practice can help find your next spark of inspiration.

Five things brands should be leveraging in their digital strategies in 2020
November 25, 2019