These are all the of provinces and territory that went to the polls during the COVID-19 pandemic and re-elected their incumbent governments, sometimes with the promotion to majority status.

As of August 17, Nova Scotia reversed the trend.

It’s a remarkable turn of events, one that will leave pollsters and political pundits scratching their heads for some time.

Not two months ago, the Liberal Party was dominating poll after poll—what seemed to be a message of thanks for the successful handling of the COVID-19 pandemic. Opposition Leaders Tim Houston and NDP Leader Gary Burrill were benched for close to 18 months while the new Premier enjoyed days of prime time COVID-19 briefings.

There’s no shortage of possible factors at play here: inaccurate polls, an engaged, undecided voter, some poor issues management on the part of the incumbent, the solid ground game on the part of the PCs, perhaps a restless need for change after a year like no other. But our analysis has taken us to the profound significance of finding the right message that matters and sticking to it.

The Progressive Conservative campaign spoke to the healthcare crisis in Nova Scotia with relentless repetition and the conviction that they alone could fix it. A family doctor shortage and wait times are acute topics for many in this province but stand in stark contrast to the success of how the province and Liberal government handled the pandemic.

To some, it seemed unfathomable that an opponent could win on this issue. But Houston and the PCs put healthcare front and centre right out of the gate of this campaign and made every speech, every debate and likely, every conversation on the doorstep, about healthcare.

As a PC Caucus staffer, I listened to now Premier-designate Houston talk about his vision for Nova Scotia, it was adamant that his commitment to healthcare was enough to send him straight to the Premier’s Office and that this would be the narrative of his campaign.

That same persistence was used on social media. Our team in social intelligence have determined that of the three parties who were associated with healthcare, the PCs were mentioned 26 per cent more than the Liberals and 100 per cent or twice as much as the NDP. 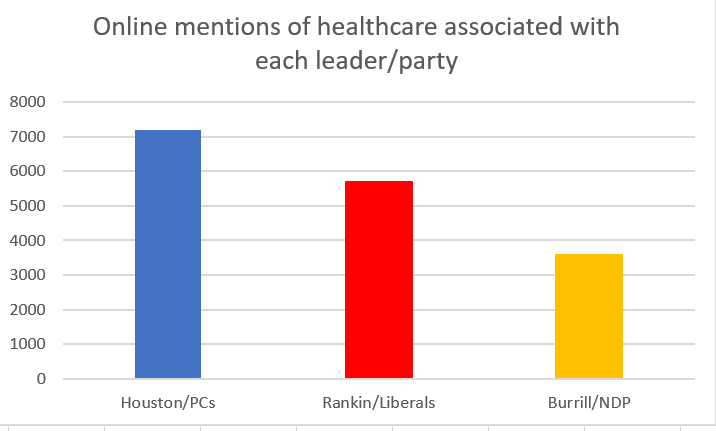 It’s clear that he was right on the money and that his discipline paid off.

But why was this the issue that pushed Nova Scotians to shift the political landscape?

Simply put, they didn’t have to convince voters that something was wrong. With high numbers of Nova Scotians seeking primary care, notices of closures in emergency departments and frequent headlines on healthcare in the weeks and months leading up to the election, it didn’t take much convincing. He didn’t have to educate the public on this problem.

We should never take for granted the power of a compelling, consistent, narrative. Paired with an effective message, discipline, and a ground game, it can convince, influence, and in the case of Nova Scotia, it has the power to change governments.

The opposite is equally true: without a singular issue or key message, people will fill the void with what they want or leave it empty. It’s a lesson all organizations and leaders can learn from.

A failure to own your issue or communicate your key message clearly is a failure to reach your audience.

To the misfortune of the now opposition Liberals, they never could pinpoint that key message—that one issue that galvanized voters—and it cost them dearly.

Feel free to reach out to our team of Public Affairs and Government Relations experts. We understand what’s going on behind the scenes and we can help you navigate.