On March 29, 2022, Nova Scotia’s Finance Minister Allan MacMaster introduced the first provincial budget of the Houston government since they were elected to a majority government 7 months ago. The budget projects a deficit of $506.2 million, as the new government has committed to making significant investments into healthcare, an issue that was at the core of their election campaign.

In the lead-up to the budget, Premier Tim Houston had been facing pressure from opposition parties and the general public to address affordable housing concerns and the meteoric rise of housing prices in the province. In response, the Houston government provided an increase of $15 million for affordable housing programs and $32.2 million dedicated to addressing the Affordable Housing Commission’s recommendations. In addition, the government took action on out-of-province home buyers by announcing a new five percent deed transfer tax for non-residents who purchase a residential property.

NATIONAL’s team of social intelligence experts have analyzed hundreds of posts, comments, and articles across both traditional and social media to measure Nova Scotians’ reaction to the 2022 Nova Scotia budget. Here’s what we’re seeing:

Focus on the numbers

A $13.2-billion budget, with $5.7 billion allocated to healthcare, and a $506.2-million deficit: at a glance, the online conversation is all about the numbers. The words “deficit,” “million,” “money,” “capital budget,” “dollars,” “spending,” “net debt,” and “cost” are all among the top keywords used in conversations about the province’s budget, and online news headlines frequently refer to the budget as the “largest ever capital plan,” and take note of the “spending boost” and “big jump in expenses” contained in the plan. There’s no doubt about it, Nova Scotians have money on their mind. 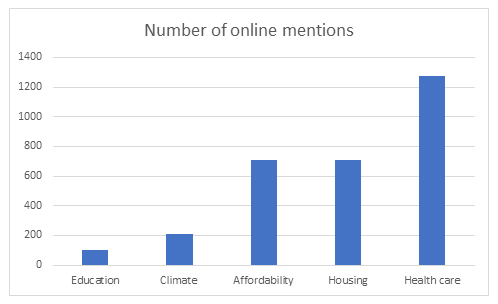 As is the case with any significant event like a budget presentation, the regional desks of the major national news outlets and smaller local outlets have been prolific in their coverage of the budget since its presentation. Our analysis shows that close to 1,500 traditional media articles and broadcast segments have touched on Nova Scotia’s budget since the early hours of March 29, meaning that there is a wide range of information and opinions about the budget available online. These outlets and their journalists are also vocal on social media, where they drive a significant portion of the conversation, informing users and prompting them to discuss the contents of the budget.

As the focus shifts from the initial presentation of the budget to the analysis and response phase, the voices of opposition parties and key sector leaders and experts are rising above that of the governing Progressive Conservatives’ message. Traditional media coverage in particular is moving toward featuring the reactions of subject matter experts, which range from reasonably satisfied in healthcare to disappointed on the part of those concerned with affordability of life in Nova Scotia.

These voices are also rising above the fray on social media. Nova Scotia’s New Democrats have been especially vocal in their response to—and criticism of—the budget. In the day after the budget presentation, the party’s Twitter account had shared more than 17 posts referencing the budget directly. Combined with social media activity from the party’s MLAs, its leader, and supporters, the New Democrats are driving the conversation around the budget almost as much as the Progressive Conservatives.

As the key focus of the budget, healthcare is also the primary preoccupation of the online conversation surrounding the province’s latest financial projections. In fact, close to half of the online mentions of the budget reference healthcare. Those mentions show that the general reception of the healthcare initiatives and funding in the budget have been well received by the public and especially by the medical community. The online conversation surrounding investments in virtual care and recruitment praise the government for recognizing the need for support in these areas and delivering on their campaign promise to tackle the flaws of the province’s healthcare system.

On the other hand, the online conversation has also identified areas that Nova Scotians feel the budget does not sufficiently address. Nova Scotians sharing their reactions on social media are deeply disappointed with the amount allocated to mental health and point to the discrepancy between the $102 million promised by Tim Houston’s Progressive Conservatives to fund universal access to mental health services during the campaign and the $20.6-million increase featured in the budget. Activity trending on social media also discusses the “social determinants of mental health”, like cost of living.

Although the budget includes a number of funding packages for affordable housing initiatives, Nova Scotians appear to remain frustrated. The non-resident deed transfer and property taxes received some positive attention on social media from realtors and other industry specialists, but the absence of non-market housing has been a key topic of the online conversation, in part driven by the New Democrats’ social media activity on the topic.

The criticism of the housing support included in the budget also dovetails with anxiety around the rising cost of living in Nova Scotia. The social media activity generating the most engagement cites this anxiety and accuses the budget of ignoring the concerns of ordinary Nova Scotians. The Canadian Centre for Policy Alternatives, alongside opposition leaders, has been vocal across traditional and social media, arguing that by failing to increase income assistance, the budget “wouldn’t make a difference for Nova Scotians living in poverty.”

Unlike healthcare and affordability, funding to combat climate change is a much smaller part of the online conversation about the budget. Fewer than 500 of the more than 2,000 online mentions of the budget reference the environment and many of these are driven by climate activists and experts. The theme is also noticeably absent from the traditional media coverage of the budget. The online activity that does mention climate change is concentrated on social media and expresses concern that the budget does too little to truly address the threat to Nova Scotia’s environment.

The online conversation shows a fairly balanced reaction to Nova Scotia’s 2022 budget. The broad healthcare initiatives that the Progressive Conservatives campaigned on have been well received by Nova Scotians who remain keen to see increased recruitment and reduced wait times. Nonetheless, those most likely to express their dissent—opposition party figures and other groups with a specific agenda—have made their positions known and they won’t be backing down without a fight. One thing is for sure, the quest for affordability among Nova Scotia’s political ranks doesn’t end with this budget.

NATIONAL’s social intelligence teams will be keeping a watchful eye over how online discussions about topics that matter to Nova Scotians take shape throughout the fiscal year. Their insights tell our clients where things are and where they are likely headed so that they always have the latest data and insights to guide them.