NATIONAL’s Ontario Public Affairs team brought together the best and the brightest from the fields of public opinion research, polling, government relations and the media Wednesday morning for breakfast – and a frank chat about the issues and challenges facing the politicians and public for Ontario election 2018.

A New Way of Campaigning for Ontario Election 2018

Ontario Election 2018 will be like no election we have experienced before – modern, digital and in the moment.

It means political parties have so much more to contend with than they did in past elections, from traditional to social media to citizen journalists and the always on multi-channel universe.

Election 2018 could also be a so-called “change” election with the Liberal Party, which has been in power since 2003, replaced by either the Progressive Conservatives or the NDP.

Much is at stake.

NATIONAL’s Ontario Public Affairs team brought together the best and the brightest from the fields of public opinion research, polling, government relations and the media Wednesday morning for breakfast – and a frank chat about the issues and challenges facing the politicians and public for Ontario election 2018. 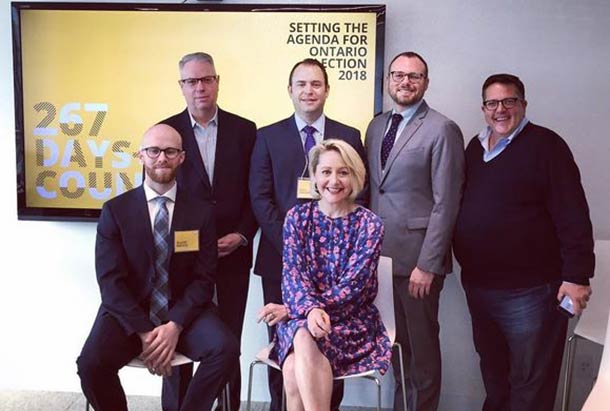 We heard the June 2018 campaign will be fought under new political financing rules. The ubiquity of social media combined with traditional media will also play a major factor.

Here’s how he described it:

“So, if we go into a campaign in which the Liberals become untenable then that’s when the NDP starts to become an option people will consider,” said Mr. Bricker.

The PCs are currently leading the Liberals and NDP in the public opinion polls.

Jobs, the economy, lower taxes and lower energy rates will be among the top election issues.

The 2018 campaign will not just be fought in the traditional media. Social media will be a big battleground, and identifying who is influencing the conversations around important issues will be crucial.

NATIONAL Public Relations’ data scientists, Jonathan Litwack and Blaine Mackie, mapped the influencers and their conversations around the controversial issue of Hydro One.

Their observations showed that Queen’s Park and the media are not the only ones controlling the conversations. The two, through their research, identified a woman named Karen from Peterborough whose reach on social media on the hydro issue is vast, and potentially influencing the debate.

The key is to tap into her network, and be able to know exactly what the conversations around the issues are. It takes the second-guessing out of the equation, noted Mr. Litwack.

“Ultimately, as we ramp up for this election, the question is: Do you know your Karens?” he said.

Adding to that, Dan Mader, NATIONAL’s senior vice president in Ottawa, who also knows his way around a campaign having worked on provincial campaigns in the past, noted the 2018 campaign will still be augmented with some of the tried and true methods.

He said that more and more the conversations on social media will be targeted through paid messages from the parties. And an individual might not even realize where it is coming from.

The parties’ agendas are yet to be set – so there’s time to get your issues heard to insert your voice into the election conversation.