In a time of increasing uncertainty in Alberta, there were no surprises as Finance Minister Travis Toews presented Budget 2020 to the second session of the 30th Legislature. A plan for jobs and the economy, the proposed budget document, proffers expenditures of $56.8 billion against estimated revenues of around $50 billion for the 2020-21 fiscal year, which are projected to grow by 7.8 per cent over each of the next two years to $58 billion by 2022-23. It’s notable that $17.1 billion will come from personal and corporate income taxes this year, and only some $5.1 billion in royalty income.

Over the term of its mandate, the GOA expects energy royalties to increase 38 per cent as both oil production and pipeline capacity expand. Minister Toews says Alberta is on track to lead the country in economic growth over the next two years, with real GDP growth returning to pre-recession levels of 2.5 per cent this year and about 3 per cent thereafter.

Government policies can either support growth or impede it, but they cannot create it. A robust economy and real wealth creation is built on the effort, investment, and ambition of citizens and businesses. Government’s role is to provide a business environment that is nimble, predictable, and one where there’s a high correlation between effort, risk, and reward. —Finance Minister Travis Toews

What does this mean for businesses and organizations in Alberta? Who will benefit/suffer from this budget? Here are our takeaways:

This government believes the best way to spur employment is to enable corporate job creators through reduced taxes and red tape. Tax cuts were central to the United Conservative Party’s election platform, and corporate taxes have been reduced from 12 to 10 per cent since the election. This will continue to fall annually until achieving 8 per cent in 2022, the lowest rate in Canada. Despite these measures and a clear desire, unemployment has increased since the election and currently sits at about 7 per cent. The UCP expects that to fall to 6.7 per cent by year end and to pre-recession levels of 5.1 per cent by 2023.

A key theme for this government is that Albertans pay significantly more for services than other Canadians, often with poorer results. This was the conclusion of the Blue Ribbon Panel on Alberta’s Finances (also known as the “MacKinnon Panel”) that reported to the government last fall. The government’s response is to reduce public sector compensation, which represents more than 50 per cent of the budget, and to improve service delivery. This government maintains the freeze on 60 per cent of expenditures (Health, Education, Community and Social Services, and Children’s Services) and continues to cut in all other areas. Population growth and inflation are not reflected in the budget, so Albertans will have to get used to paying more and getting less in return. 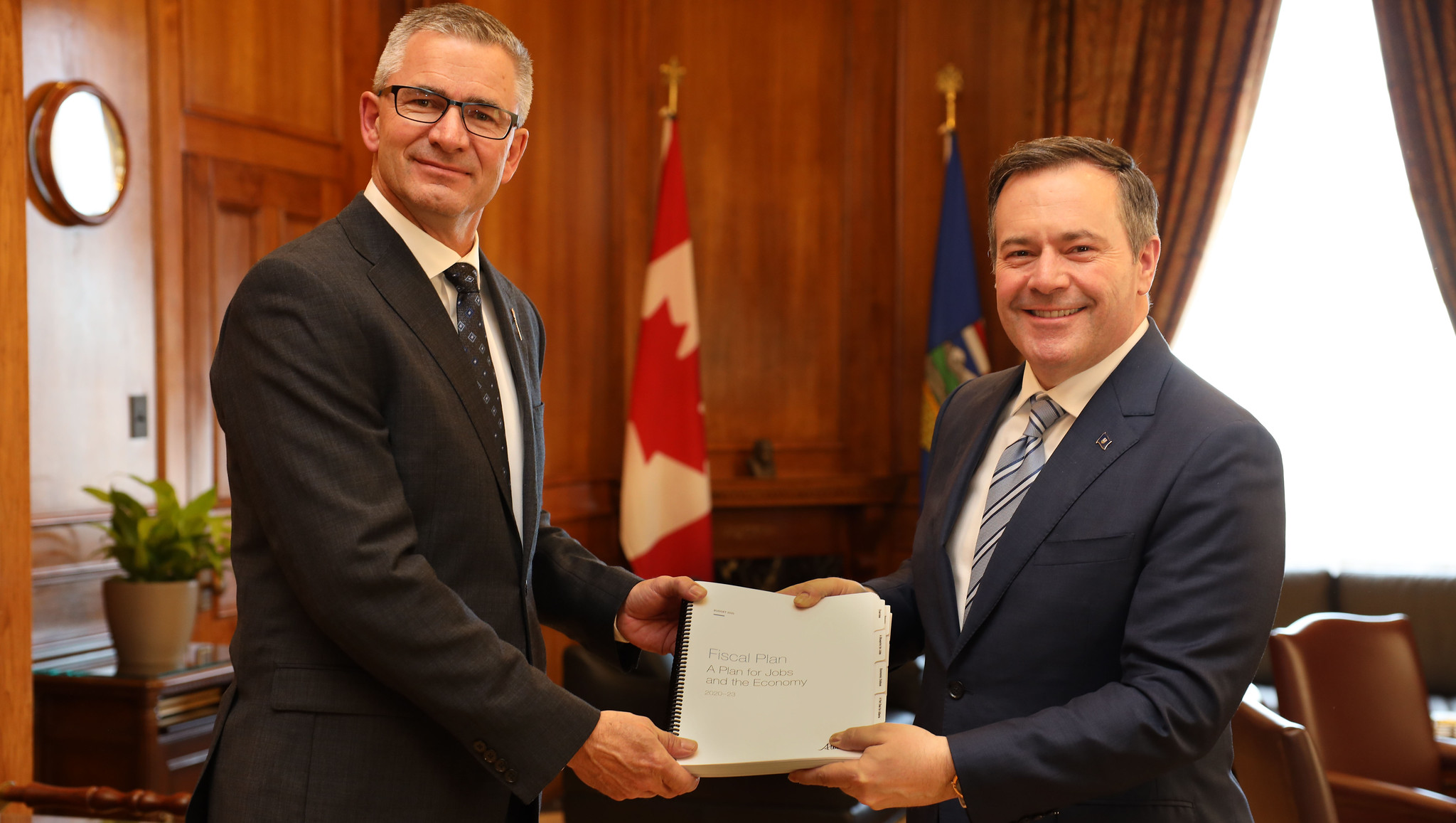 Budget 2020 shows the government remains resolutely focused on cutting costs and reducing the size of the public service. Noting that Alberta is on track to balance the budget by 2023, Minister Toews says the government plans to reduce operating spending by $1.2 billion (2.5 per cent) over the next three years. He also noted that since 2015, government ranks have swelled by 10,000 full-time equivalency positions, or about 2.3 per cent per year. The government’s goal is to reduce staffing costs by 2.1 per cent over three years, primarily through attrition. This will be challenged through collective bargaining of agreements covering about 270,000 public servants which begins in March; the government is offering no pay increases. The Minister’s plea for public sector workers and their unions to “work with us as partners” does not feel optimistic.

Although the Minister’s tone was upbeat, Alberta continues to face recessionary pressures. Statistics Canada reported that the number of payroll jobs in Alberta fell for the fourth straight month in December. At the same time, the Conference Board of Canada released a report saying Alberta's economy shrunk slightly in 2019, with real GDP contracting by 0.2 per cent compared to the year before.

The budget keyed in on Alberta’s relationships with the federal government. Over the past five years, Alberta has contributed $100 billion to the national treasury and with the support of the nine other provinces, has asked Ottawa for $2.4 billion in retroactive fiscal stabilization payments. One of the stronger messages in the budget speech was: “I call on our federal government to unequivocally and tangibly support growth in the Canadian energy industry, and our fair request for a retroactive fiscal stabilization payment.”

In all, the Government of Alberta has stayed the course it promised during the election and in the October 2019 Budget.