As Internet ubiquity has grown, so has data collection. Our ability to sort, understand, and derive insights from data raises questions and creates opportunities for public relations, and also raises more profound societal questions around the quantification of human behavior, privacy, and ethics. Upon completing a course on Big Data and social analytics at MIT, Kevin McCann, a NATIONAL partner based in Halifax, prepared this reflection.

Near the end of 2016 I completed an 8 week course from MIT on big data and social analytics. It was fascinating, challenging, timely, and thought-provoking. Here are some reflections.

Saying everything is disrupted is the conceit of our time, but it is a truth that we are experiencing a societal shift. As we create ever more wonderful and fascinating devices to distract us, drive our cars, modulate our temperatures, track our fitness levels, we will be creating more and more data. Data that we can use to tell us more about ourselves and our world. Alec Ross describes the implications succinctly in his book “The Industries of the Future”:

The inference is clear and stark: How well data is used and understood will have a great influence on organizational and enterprise success. Thus the rightful fixation on data-driven PR in marketing and public relations.

Social physics coming into its own

An older term than you might think, social physics is a way of understanding human behaviour based on the analysis of Big Data. Whether the term “social physics” sticks or not, it represents the collision of social sciences with the data-driven disciplines and the logic of engineering, physics, and computer science. This is very relevant for public relations, marketing, and communicating in general, because looking at behaviour and what people actually do will always be more truthful than what people actually say. MIT Professor Sandy Pentland puts social physics in context and why it is relevant to our present day:

What’s happened now that we have the big data, this rich data– things from social media, things for cell phones, from credit cards– all those other sorts of things, is that we finally have enough data to really answer, in a quantitative predictive way, the questions of social science. How do ideas move from person to person? How do you get tipping points? How does all this stuff work? That’s what social physics is. It’s a mathematical, predictive science of how ideas move through society.
Source: Social Physics Can Change Your Company (and the World)

Social media threw gasoline on specific areas of analytical study, moving them from obscure and specialized to commoditized and highly relevant. If we could look at a group via who they call, who they spend time with, where they spend money and where they go, and who their social media friends are, we can get a richer picture of what inspires and resonates with an individual beyond what they say on the internet. One of the by-products of the internet has been to truly expose and normalize the data of our species, and we are just at the beginning of understanding this.

Advances in technology force an ethical pause and more often than not, a reckoning. We need look no further than our Netflix or Amazon recommendation queue to see the role that algorithms are playing in our lives today. No human devised these lists, other than crafting the logic that fills them with things you will spend your time and money on. Consider:

The application of ethics to a big data and algorithmic world are still undiscovered lands where we are just finding our way. Communicators must help organizations navigate in ways that are truly trustworthy, lest they fall victim to cynicism and apathy among their publics. This charge is part of the mandate of public relations today.

Taking this course took me back to the fun and challenge of thinking in code. The Python exercises and deliverables were both humbling and empowering. And thinking as a communicator and a developer was perfectly embodied with Jupyter Notebooks—a simple but ingenious way to combine writing and programming in one intuitive place (a tool I wish was in place for every other programming source I’ve ever taken).

Beyond my own little reverie, this is relevant as it applies to the talent needs of the future. Observers and predictors are seeking specialists, but beyond that organizations and leaders are seeking those who can think in multiple disciplines and understand the implications of data, the realities of an algorithmic world, and apply the logic of programmatic thinking to the art and creativity of social sciences. Beyond lucrative specializations that the market simply will pay for, a mish-mash of thinkers that understand technology, data, and humans in a changing context will continue to be in demand.

As Tim O’Reilly put it,

Instead of the binary question of which jobs will be eliminated…it is what tasks that are being automated, and automation doesn’t simply destroy jobs. It changes them.
Source: Don’t replace people. Augment them

This is where we are, and where we are headed, and many prepared to handle this future will be able to apply technical and social-sciences thinking to new contexts. This is especially true for communications and public relations, and is underpinning jobs and the need for talent across industries: 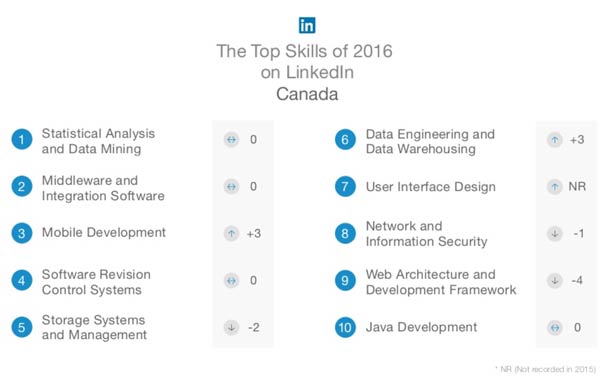 Source: LinkedIn Unveils The Top Skills That Can Get You Hired In 2017

When the web and personal computing started to become accessible, vocabulary that is common today was new and inaccessible then. Even small words, acronyms, and phrases like HTML, script, pixel, database, SQL, app, api, social graph, have become common concepts for anyone thinking in a communications context, or their relevancy is at least understood and appreciated.

This normalization of terms will become true for data analysis and network analytics. Terms like eigenvector, centrality, betweenness, aren’t new but their meaning is becoming more relevant, as their specialized fields are more applicable in an algorithmic, data-fueled world. Those outside of specialized fields won’t actually use these words, but many will internalize the concepts and be able to apply to their jobs and context. This I believe, forgiving my own bias, will be particularly true for anyone charged with a communications role. We are just at the beginning of the applying true data analytics and social physics to communicating in the modern world.

Some of the links from above are captured here, or added to below with articles that caught my eye in the last weeks of 2016.

Trendspotting: My obsession and why it should be yours too
July 03, 2017