Robyn Doolittle is an investigative reporter for The Globe and Mail. She is fearless and tenacious and her recent reporting on police handling of sexual assaults complaints is changing public policy across the country.

Dr. Holly Johnson is a criminology professor at the University of Ottawa, whose academic research on sexual assault, and how this crime is handled by the criminal justice system, helped to inform Ms. Doolittle’s reporting.

The two women spoke to about 100 women Wednesday morning as part of NATIONAL’s Women Inspiring Leaders series. This was the third event and it was held at NATIONAL’s Toronto office. 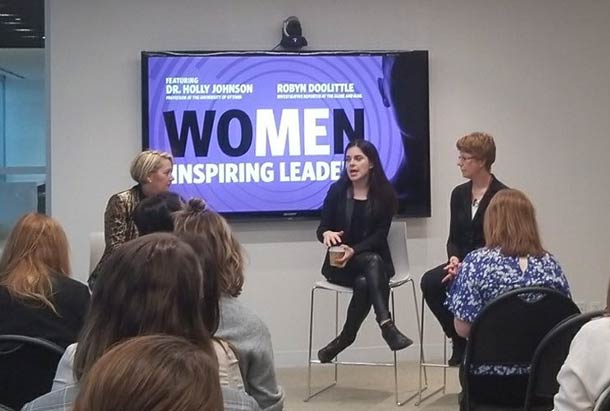 One out of every five sexual assault complaints made in this country is being deemed invalid before it even starts the attrition process of working through the system, whether we are going to lay a charge, whether it can go to court, whether it can get a conviction, Ms. Doolittle told the audience about her investigation.

She spent 20 months researching this issue, going to police forces across the country, extracting their data and analysing it.

Her research revealed that police regularly dismissed sexual assault complaints or they “unfounded” them, meaning that they determined the crime did not occur.

At the same time, Ms. Doolittle studied 54 specific cases of sexual assault. The women’s stories of the way in which they were dealt with by police helped to bring the data to life.

Dr. Johnson has been researching the issue for decades, chronicling how women are treated by the criminal justice system.

“We have deeply rooted biases against women who talk about sexual violence,” says Dr. Johnson. “We may be seeing a sea change at the moment but generally women are not believed.”

She says that traditionally when women report a sexual assault they are greeted with skepticism by authority figures, such as police, who say – “It couldn’t have happened.” “It couldn’t have been that bad.” Or, “He’s a nice guy.”

Dr. Johnson and Ms. Doolittle spoke frankly about the challenges of researching these issues around sexual assault and our justice system. They have both encountered opposition to their research.

For the women in the audience, Wednesday’s discussion took place amid the conversations around #metoo and debate over misogynistic behaviour.

And so what Ms. Doolittle and Dr. Johnson said was at times illuminating, disturbing and sometimes a little frightening – but it was not without hope.

In fact, both women believe that important policy changes are coming – slowly – as a result of shining a light on this issue. In fact, in some areas, change has already occurred.

Says Dr. Johnson – “We seem to be believing women who are coming forward to talk about sexual assault and sexual violence more than we have in the past.”

“Policy change is really hard and it’s really hard with the police,” she said. “But I think if a number of police forces do bring in oversight and do honestly want to look at how they can improve, then it might become a negative thing to be the odd police force out.”

“There are a lot of really good things happening,” she says.

For example, over the last year, since her story was published, more than 100 police services have reviewed their cases and 37,000 cases, about half of which were closed as unfounded, are being reopened.

In addition, a little more than half of the country is being policed by a police service that is implementing trauma informed training.

NATIONAL’s Women Inspiring Leaders series has looked at other important subjects, including being a woman in politics and navigating the corridors of Parliament Hill and provincial legislatures and the challenges faced by women in the business world, especially retail.

In the coming weeks, NATIONAL will be turning again to politics for its next WIL breakfast, exploring what it’s like to be a candidate in a provincial election as Ontario goes to the polls in June.

Our favourite creativity kick-starters from the Calgary studio
February 15, 2018