Sarah Keast is a widow, mother and social activist whose husband was a heroin addict and died of an accidental overdose just over two years ago. At this year’s 10th TEDxToronto conference, held on October 26, Keast talked openly and frankly about his death to more than 1,300 people who attended. It was emotional; her speech was heart-wrenching.

Keast was one of 14 speakers at the day-long conference, whose talks addressed the theme of IDENTITY. Whether an expert within the field or an individual with a deep personal connection to a topic, all of the speakers delivered stimulating and thoughtful talks, including topics such as Indigenous issues, [dis]ability, food, business of sports, virtual and augmented reality, crime, politics, racial issues and gun violence. NATIONAL was there to hear them.

Four members of NATIONAL’s Toronto team volunteered—as TED is a non-profit organization after all—to drive efforts around media relations. NATIONAL’s mandate was to generate buzz—securing TV, radio, and online interviews with speakers, looking for opportunities to insert mentions of the conference into relevant articles, and of course, encouraging influencers in Toronto to churn out content before and during the conference.

Internally, and with the TEDxToronto executive team, NATIONAL did what all PR professionals do—brainstormed, strategized, planned, wrote, created media lists and more—by leveraging our expertise in media relations and event marketing.

It was an incredibly rewarding account—and we had so many wins.

A number of speakers gained well-deserved media attention from CBC Radio’s Metro Morning with Matt Galloway, CP24 Live at Noon, Breakfast Television, Toronto Star and She Does The City. 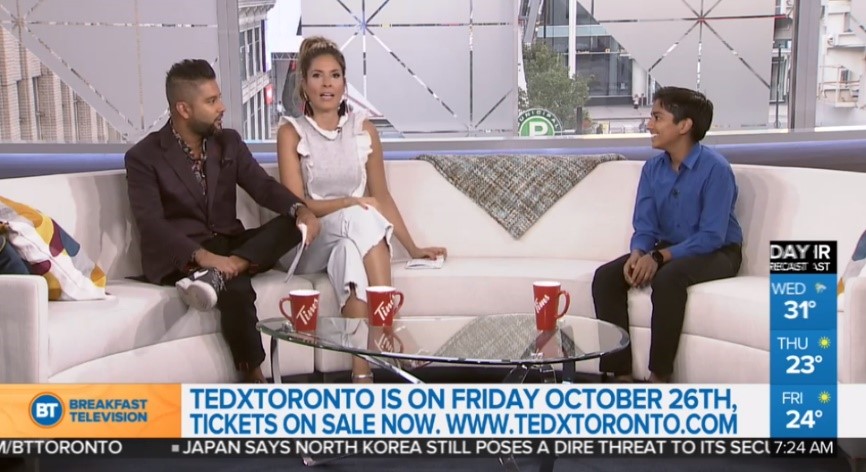 While all speakers delivered phenomenal TEDx Talks, below are some of our highlights and favourites quotes from the conference:

One of the most impactful lines of the day was delivered by the first speaker, Carol Off, Host of CBC Radio’s As it Happens: “We’re all just part of the human race. So in that case, who is the other?”

This encouraged all of us to get past the “other”. After all, we have one kind of blood in us—human blood. So then, Off asked what makes us think that we should identify ourselves as so different? 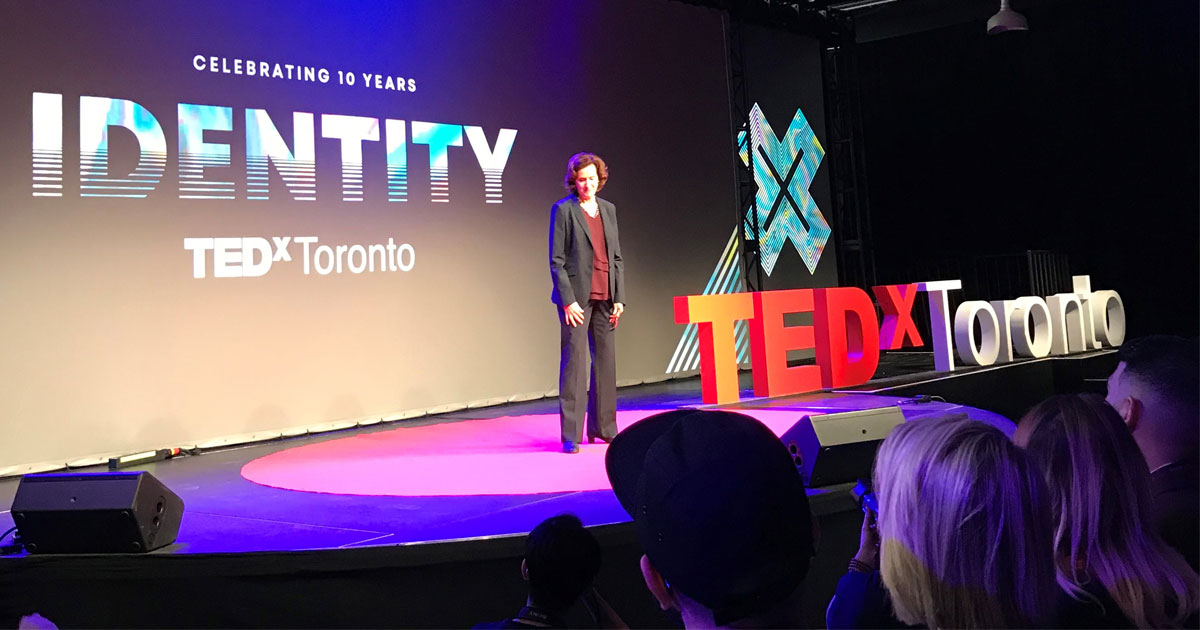 Toronto Raptors President, Masai Ujiri also addressed the captivated crowed. Born in Nigeria, Ujiri is proud of his country and all of Africa. He believes that the business of sport can add positive change to his home continent.

Since 2003, his non-profit organization Giants of Africa has developed players at the local, national and international level, allowing talented athletes, sometimes referred to as “raw” and “lacking experience”, to gain access to coaching and proper facilities. He challenged us to think differently about his home. He declared, “It’s time to be curious about Africa.” 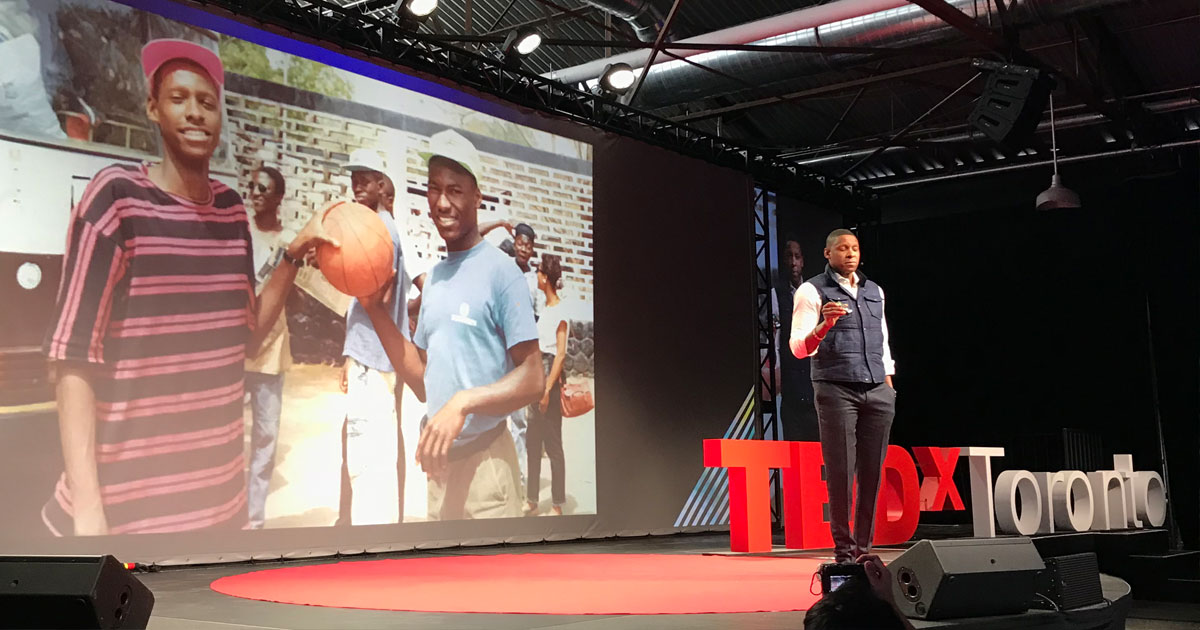 Toronto-based food writer Suresh Doss spoke passionately about how food is an important part of who we are. He harkened back to his days as a young boy in Colombo, Sri Lanka, helping his grandmother run a food stand. Witnessing his grandmother’s ability to transform someone’s day through food was, in his words, “absolutely hypnotizing”.

Think of some of your favourite family dishes and consider your life without them. How many dishes are a part of who you are? What might be lost if those dishes cannot ever be recreated again? 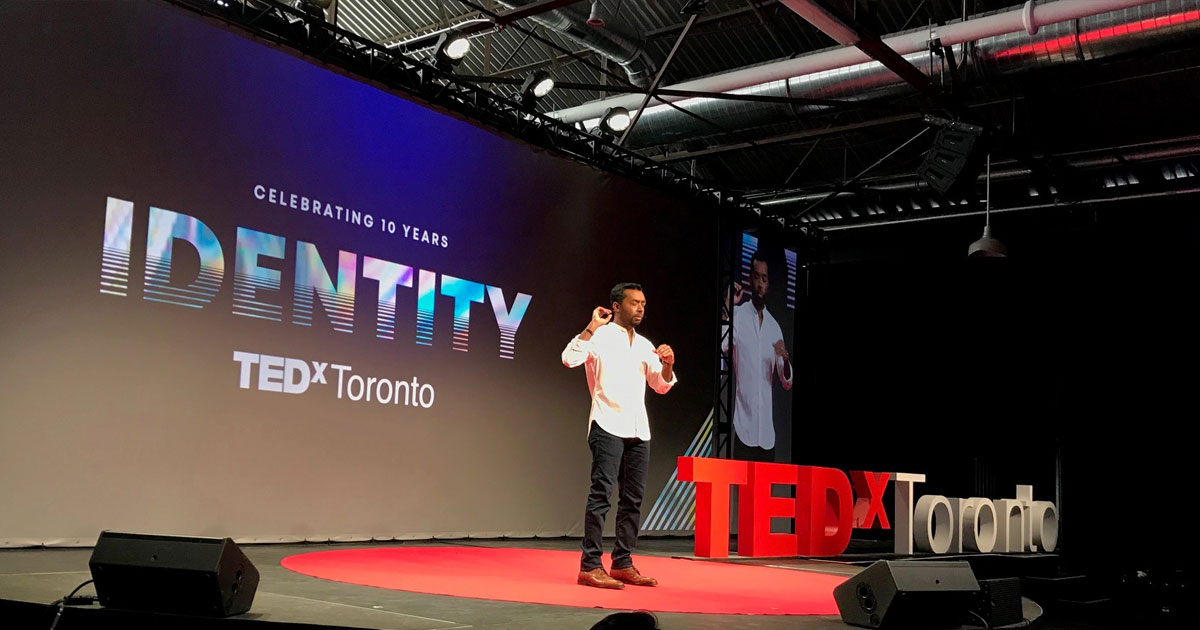 As mentioned earlier, Sarah Keast gave the most emotional speech of the day. She called herself out for first identifying her husband as an “addict” and not as the hardworking, loving, and humorous father and husband that he also was. She challenged audience members to open their eyes to addiction, the stereotypes around it, and the people who are caught in it.

Keast asked, “If he wasn’t shamed, would he still be alive?” She encouraged the audience to reconsider the words we use when referring to addiction and drug use, as “changing words is a small but powerful way to change stigma.” 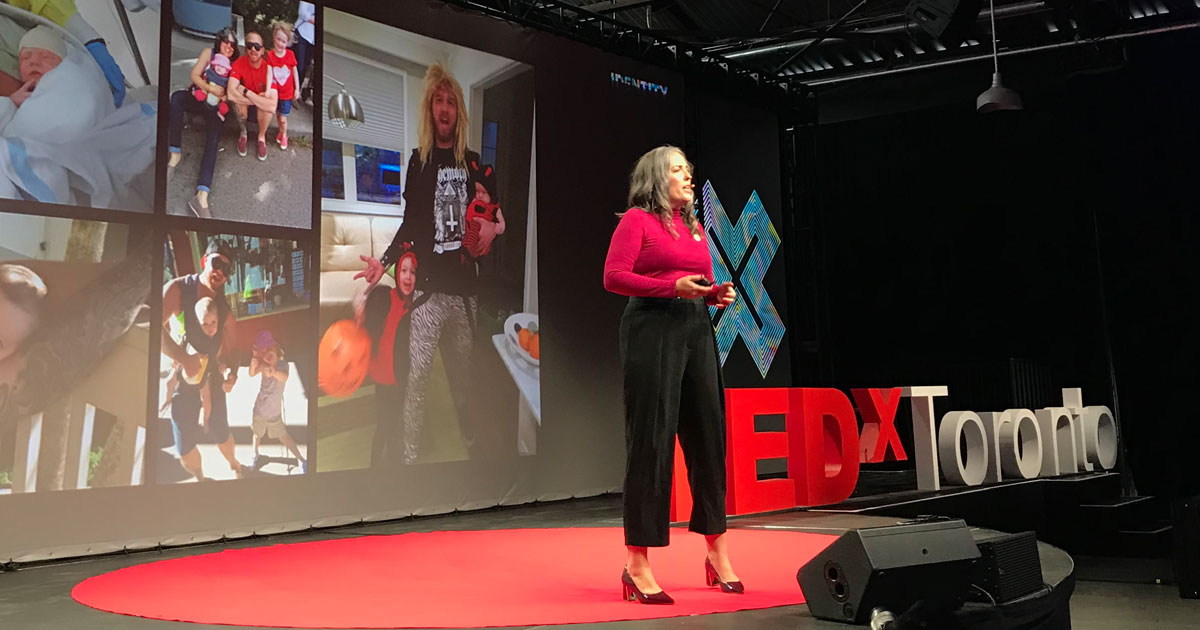 It’s not often that you see a former high-profile politician (once a rising star seen as a potential premier) standing right in front of you, detailing his life after he was involved in an altercation that resulted in the death of a cyclist.

Explaining that his blueprint for life was a ladder, Michael Bryant shared that for him, the ladder was “insatiable”. He was never, ever satisfied. Ironically, once he was forced to climb down the ladder, he found broken people who helped him see the “broken” in him.

He says that now, he is finally where he is “supposed to be”, working as a criminal lawyer at a bail court in Brampton and advocating for Canadians’ constitutional rights as the executive director of the Canadian Civil Liberties Association.

The idea that we are all supposed to be somewhere but are likely not there yet, influences how we think of our identities. 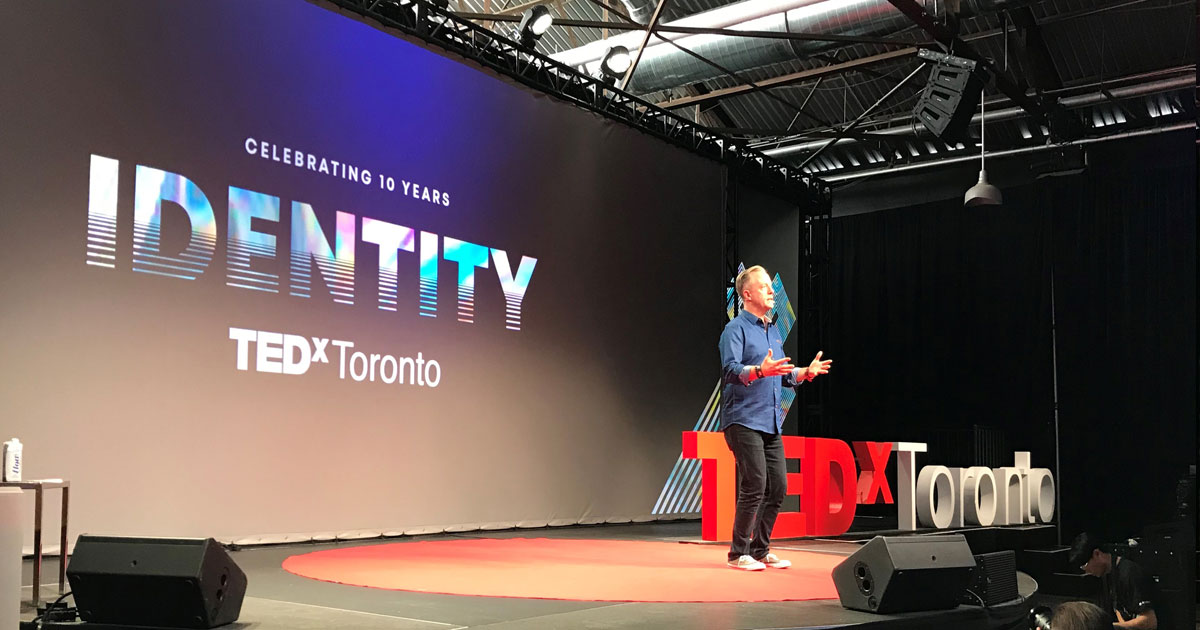 In a bright red dress, Sarain Fox walked onto the mainstage last. Of Anishinaabe lineage, Sarain is recognizable from Rise or Cut-Off on VICELAND, or APTN’s Future History.

Omitting who she is as a public figure in the media, she chose to open her talk with an introduction of herself in her language, Ojibway, just sharing her name, who claims her, and what her roles and responsibilities are within her community.

“Language ties us to our land,” she stated. “When you honour who you are and where you come from, you tell your truth.”

When you talk about yourself, do you honour your truth? Who are you? Who will you be? 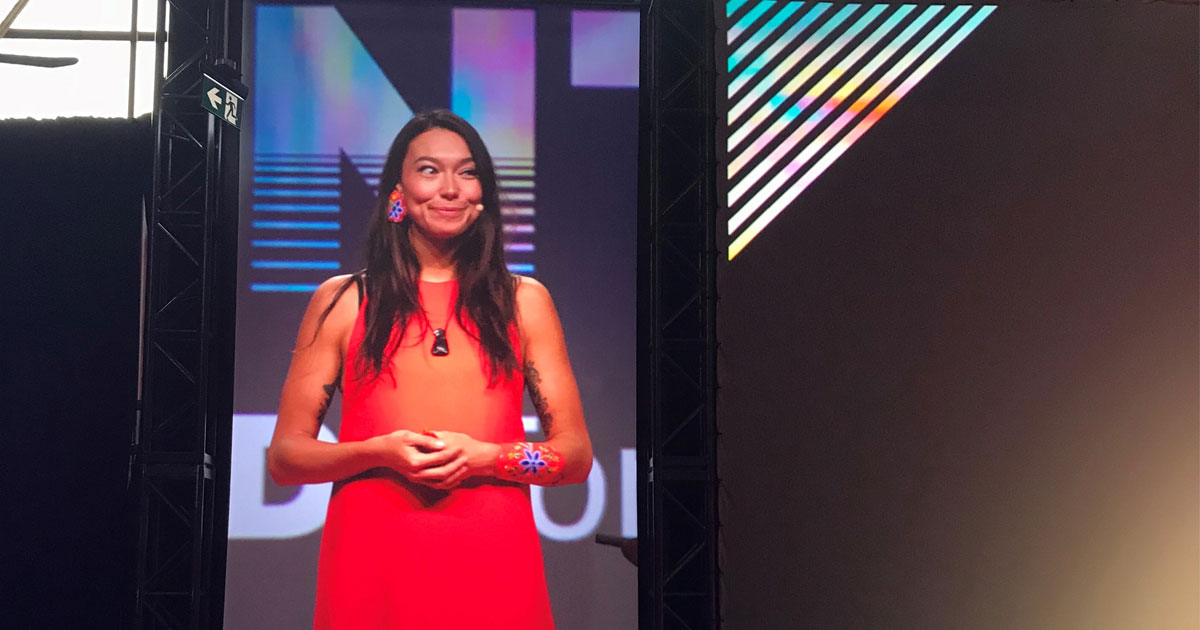 Five tips on how to produce a successful red carpet
September 17, 2018