Marie Henein needs no introduction. After taking on the country’s most high profile cases, she has emerged as a thoughtful, reasoned voice in a sensationalized news cycle. Ms. Henein has become the go-to for her opinions on the most complex issues Canada and the world are facing: how do women achieve justice after sexual assault? What are the dangers of governments who undermine the judicial branch? And why do we care about what a woman’s hobbies are and their family status so much?

That is why over 100 women filled NATIONAL Toronto’s office early in the morning for the fifth event in the Women Inspiring Leaders breakfast series. Shannon Davidson, Senior Vice-President of Marketing, framed the breakfast discussion before Jane Taber, Vice-President of Public Affairs, probed Ms. Henein about #MeToo – the cultural phenomenon of utilizing social media to take down abusers – as it relates to the law. Ms. Henein was hopeful that the progress these tactics have achieved could help turn it from a moment to a movement, detailing that it must be through tangible, productive changes to the criminal justice system or the bias will not diminish. Ms. Henein preached the opposite of yelling for yelling sake; she wants concrete measures like the introduction of restorative justice for sexual assault complaints. 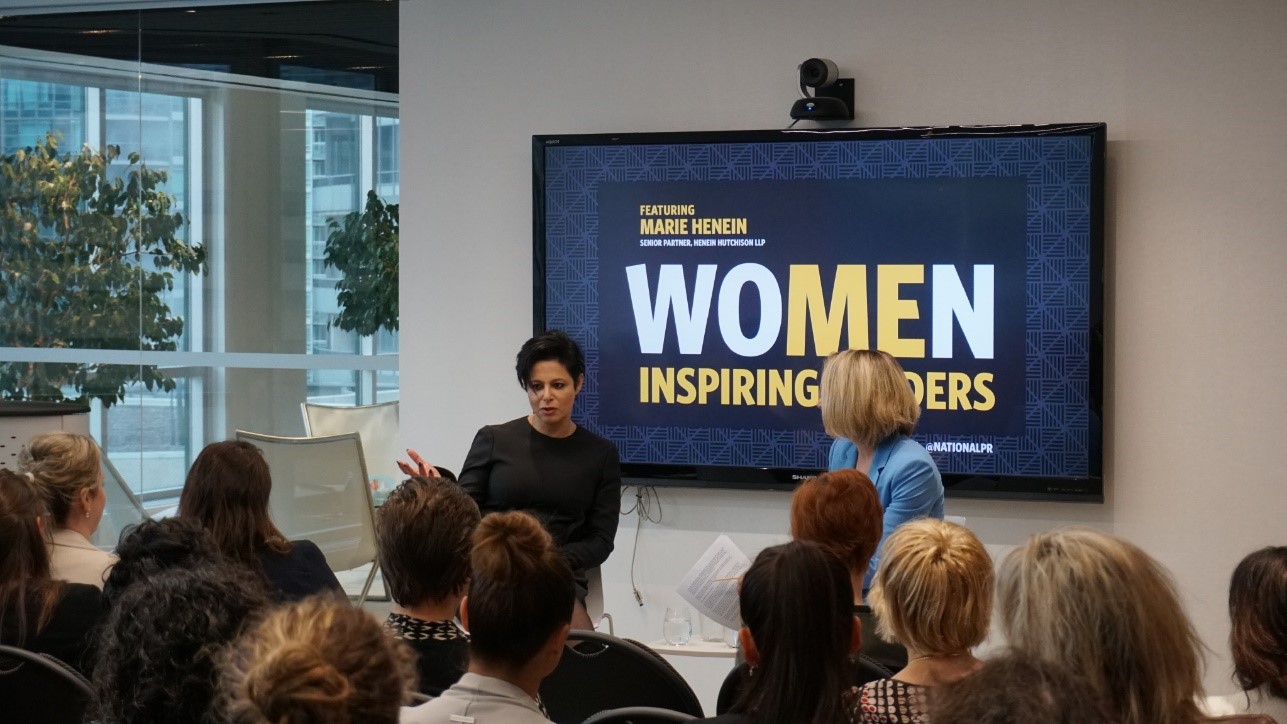 Marie Henein in discussion with Jane Taber, Vice-President of Public Affairs at NATIONAL Toronto, at the fifth event in the Women Inspiring Leaders series on October 11th, 2018.

Admittedly not a social media user, Ms. Henein still thinks even the most savvy are in “stunned observation mode” about its societal impact. She warned that, “the court of public opinion is not a real court,” and that our courts only promise, “a fair trial.” Ms. Henein also insisted that if we focus on the Harvey Weinstein’s of the world we will miss the root of the issue; he is not the exception, but a creature of institutional design.

At the end of the discussion, audience questions focused on her status as a role model. She admits that today’s instant coverage adds pressure. “Knowing others are looking means you can’t stumble,” Ms. Henein pivoted telling women that they must focus on themselves for inspiration. “Your best asset is yourself,” she repeated.

Ms. Henein ended with an antidote to the variety of issues raised through the discussion, “I think the answer to solving a lot of our problems is to include women…women, and more women.” She also snuck in her catchphrase embossed in neon lights in her office, “No guts no glory.” After an hour with her, it was clear she walks her talk.

——— Max Stern is a former Associate at NATIONAL Public Relations