Since the writ dropped on May 7, 394,593 tweets have been written that mention either #OnPoli, @fordnation, @Kathleen_Wynne, or @AndreaHorwath in Ontario alone. With such a large amount of content, it’s difficult to identify the influential voices. This is where network analysis is useful.

What is network analysis?

If you are struggling to visualize the process, picture this: when someone shares a tweet, the original author and the sharer appear in a network graph as two nodes (or circles) connected by a single line. As more people share the same original tweet that author becomes connected to each of their nodes and the size of the author’s node grows, indicating greater influence in the conversation.

In addition to identifying influential individuals, network analysis can show communities, or clusters, which are groups of people that typically interact with each other.

By conducting a network analysis using Twitter data from May 7th to May 25th, we found that there are four main communities in the Twitter conversation (represented by different colours in the visual below): media organizations (pink), the Progressive Conservatives (blue), the NDP (orange), and the Liberals (red). What may surprise you are the individuals who are leading the conversations in each community as well as the issues that matter to each community. 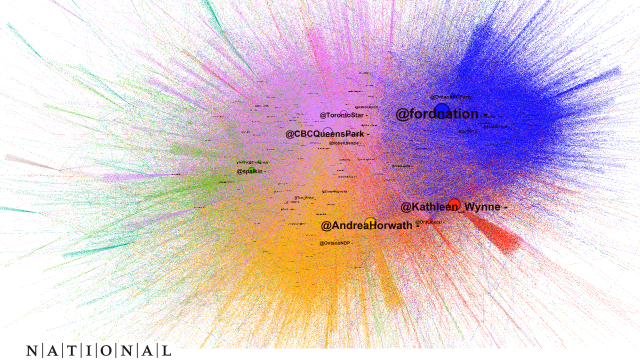 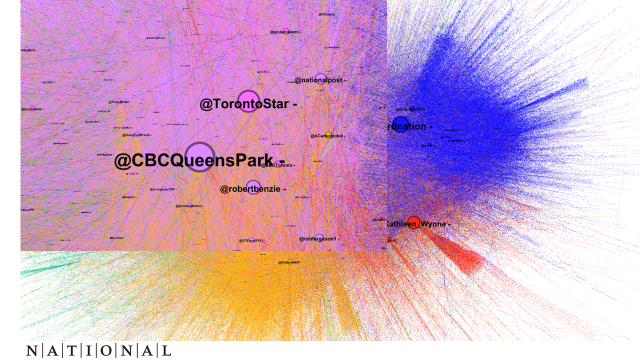 Conversation in the Progressive Conservative community is lead by @fordnation, @sunlorrie (Twitter account of Lorrie Goldstein, former reporter at the Toronto Sun), @OntarioIsProud, and @DrJacobsRad. This community accounts for 18.5 per cent of total conversation and tends to engage with content that is critical of NDP budget proposals and previous NDP governments, as well as critiques of the Liberal Party’s lack of investment in healthcare and education. Most conversation within this group is reactive to the actions of other parties. 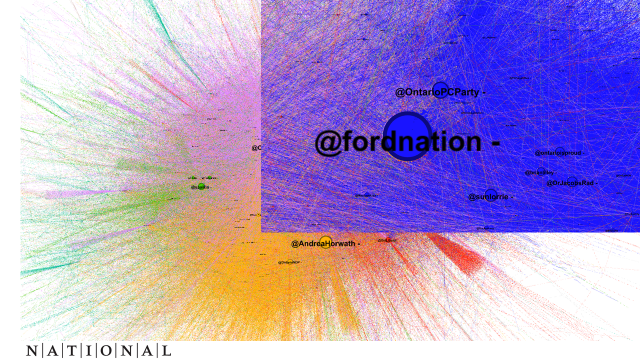 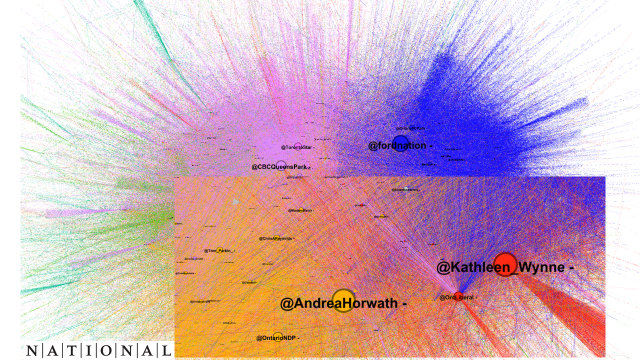 Much like recent polls, the Liberal community is trailing the Conservatives and NDP with 12 per cent of total Twitter conversation. Unlike the PC and NDP communities, there are no individuals leading conversation beyond the party leader (@Kathleen_Wynne) and the official party account (@OntLiberal), which likely indicates a general lack of public support for Liberal messaging. Unlike the engaging content from the PCs and NDP, engaging Liberal messaging focuses on policy, specifically healthcare and safe-injection sites, however, these policy-related tweets do not attract the same level of engagement as the potential scandals shared within other partisan communities.

Through network analysis, we can take a large and incredibly noisy issue and easily identify the conversation influencers, communities, and the issues that motivate communities. By applying network analysis to the Ontario election, we see the amount of support for the Liberals on social media resembles the support seen in the polls. Furthermore, we can see that partisan communities are motivated not by their own party’s policies, but by criticizing the policies, or lack thereof, of their competitors.

NATIONAL will be monitoring social conversation in the days leading up to the election. Be sure to look for an updated post on June 8 for an analysis of what people were discussing as they went to the polls.