In the end it was no contest. Ontario Progressive Conservative leader Doug Ford and his team swept to victory, NDP leader Andrea Horwath made big gains to form the official opposition, and Kathleen Wynne and her Liberals suffered a humiliating defeat.

The pollsters and pundits were right – this was a change election.

So what were Ontarians talking about in the last moments of this spring campaign? What were the conversations that led to these stunning moments – who was saying what to whom?

NATIONAL mapped the political talk on Twitter in the last week of the campaign, uncovering some fascinating findings that supported what Ontarians were seeing in the public opinion polls.

Our study revealed a dejected Liberal community that, basically, stopped talking on social media – with the exception of the one day – last Saturday - when Ms. Wynne conceded she could not win.

This is an indication of the lack of engagement and enthusiasm among Liberal supporters as the campaign wound down, especially after Ms. Wynne’s dramatic confession.

The NDP community, meanwhile, focused its tweets on Mr. Ford, trying to raise doubts about his character and business acumen, following reports of his sister-in-law’s lawsuit accusing him of depriving her family of millions of dollars from the Ford company and her late husband’s life insurance policy.

The Progressive Conservative community did not take the bait. PC conversations on Twitter revealed a disciplined approach as they stayed on message, tweeting about their efforts to save taxpayers dollars.

Here’s a deeper look at what we found:

In our first analysis of social conversation surrounding the provincial election we discovered the amount of support for the Liberals on social media resembled the support seen in the polls and that NDP and PC supporters were much more engaged in conversations that attacked other parties, compared to conversation that promoted their own.

Since our first analysis, the campaign provided some surprising twists and turns – Ms. Wynne went from “Sorry Not Sorry” (her slogan from the debate) to conceding defeat. Mr. Ford was served with a lawsuit from his sister-in-law while Ms. Horwath was not getting a lot of attention on social media even though she was competitive with Mr. Ford in the polls.

We examined the conversation topics that were gaining traction and who these topics mattered to in attempt to understand what each party was concerned with in the final days of the campaign.

We collected Twitter data that mentioned either #OnPoli, @fordnation, @Kathleen_Wynne, or @AndreaHorwath, from June 1 to June 6, 2018. We identified the candidate who was the main subject of each tweet and created a network map allowing us to infer each author’s political affiliation based on the political community they typically interacted with.

The main stories of the week before voting day were Ms. Wynne conceding defeat and the lawsuit against Mr. Ford. Our findings were based on the number of tweets authored on each day and the subject of the tweet. 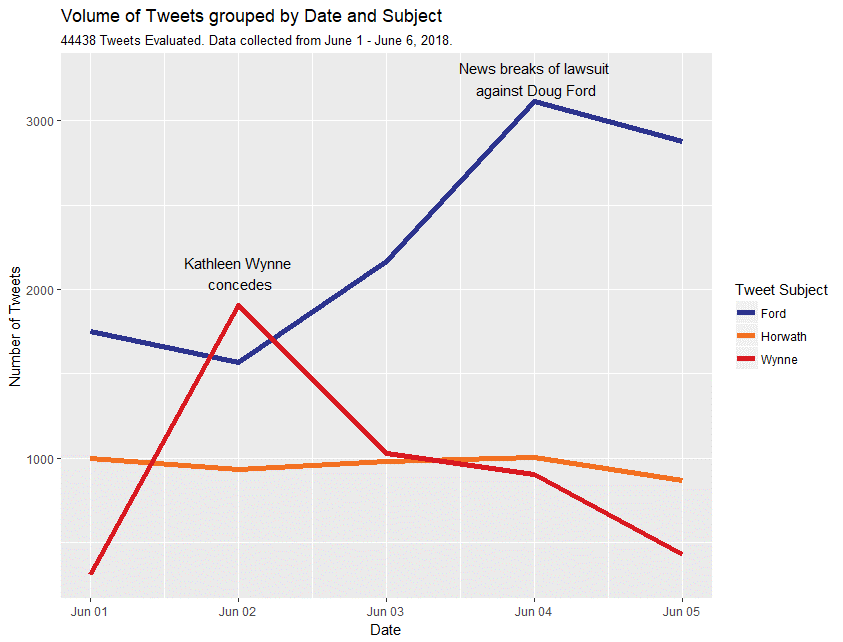 Throughout the campaign, Mr. Ford remained the biggest subject of social conversation. Other than Ms. Wynne on the day of her concession, no other leader generated as much social media conversation. Mr. Ford was the focus of an average 2,294 tweets per day, compared to 958 for Ms. Horwath and 916 for Ms. Wynne.

To understand who these tweets were coming from, we grouped the number of tweets authored on each day by the author’s inferred political affiliation. 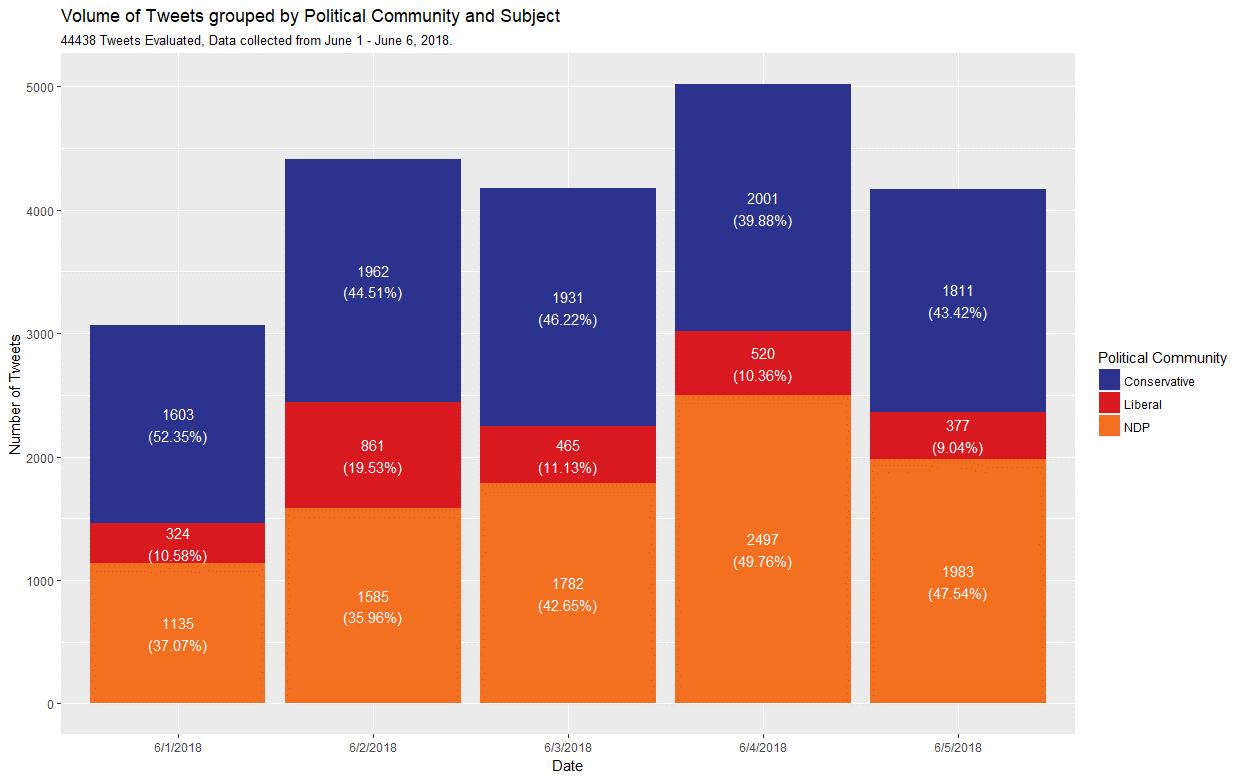 The chart above reveals the Liberal community was quiet in the last week other than on Saturday when Ms. Wynne conceded. Looking at the proportion of conversation coming from each community on each day, the PC community was much more active before news of Mr. Ford’s legal scandal. In addition, the scandal appeared to have re-energized the NDP community.

By looking at the most engaged with tweets within each community, we found the Liberal community appeared to care less about particular scandals and more about encouraging voting for Liberal candidates as to not hand the new government a “blank cheque”. However, despite the talk around Ms. Wynne’s concession, it appeared the Liberal community was just trying to wait out the election.

Early in the week, the NDP community was actively sharing Ms. Horwath’s declarations that an NDP government will bring positive change to Ontario and refuting Ms. Wynne’s pleas for a minority government.

However, as the week went on, the NDP community quickly switched focus from promoting and defending party values to drawing attention to the lawsuit against Mr. Ford. In fact, 58.07% of the tweets from the NDP community were about Mr. Ford, compared to 29.38% about their own party – clearly, a strategy to raise doubt about Mr. Ford’s ability to govern.

The PCs did not engage in mudslinging. Rather, the PC community focused on promoting how the party will save Ontarians money. They also shared the high-profile endorsements that Mr. Ford received.

In the end, our social media analysis mirrored what was reflected in the public opinion polls. It showed, too, that the Conservative focus and discipline prevailed – on the ground and in social media.