Once, the only way to get a sense of how people felt about an issue was to ask them. Now we can watch what they do on online and see what they really think.

NATIONAL partnered with Echelon Insights to watch the Globe and Mail debate – or rather watch Canadian internet users watch the debate – to see where the conversation goes, what’s of interest, and perhaps what we might be able to predict. A few insights gleaned with our friends from Echelon:

Which candidate provoked the most Canadians to go and search for them on Google during the debate?

Justin Trudeau comes out on top in this contest. He got a 52% share of Google search volume between the three candidates during the debate. His highest peak in search volume was at 9:22pm EST during a series of fiscally-related comments. Were we fact checking?

Second came PM Stephen Harper at a 35% share of total candidate searches during the debate window. Harper’s highest spike was at 10:36pm after he was asked a question from the moderator challenging the growth of Canada’s economy. He disagreed with the premise of the question citing solid growth in relation to other advanced economies despite global challenges. People seemed to pay attention to this claim and went to look it up.

Google search interest in Tom Mulcair during the debate was a mere 13% of the share. His highest peak in search volume was at approximately 8:52pm when he mentioned that Canada was a nation of immigrants and family reunification should be reinstated.

Can we draw any conclusion here? Does Trudeau inspire curiosity – or do we not know him enough yet? Are we so familiar with the other two candidates that we searched for them less during the debate?

Or maybe it’s just another data point in a sea of data points. 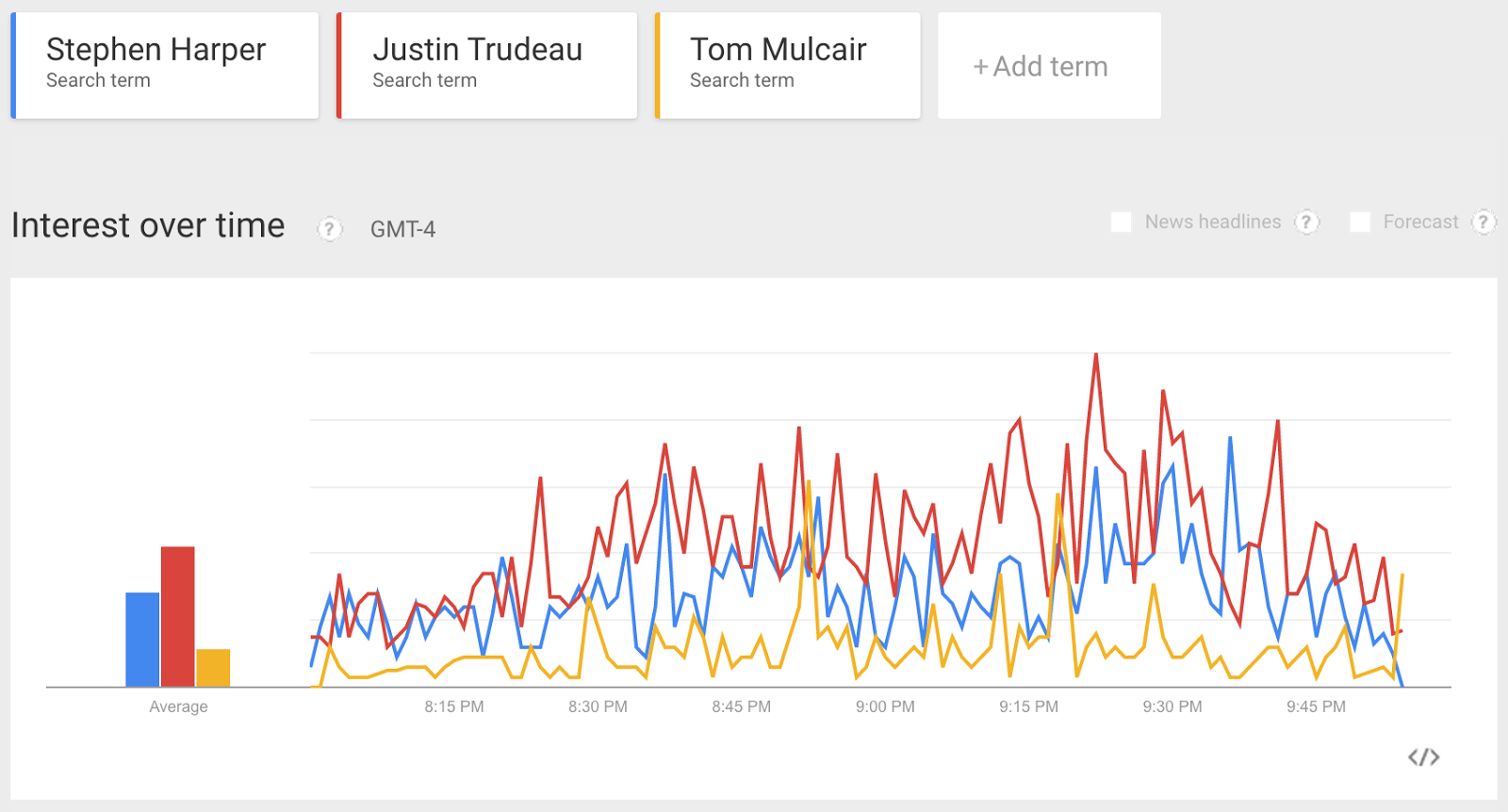 Which candidate spurred the most conversation on social media during the debate?

Tom Mulcair came out on top this time – just barely. In a share-of-voice metric, calculated as a percentage of total tweets from over a thousand Canadian political influencers, Mulcair earned 36% of the mentions.

Image: Running Total and Share of Voice Over Time: Candidates

The similarity of this metric to popular pollster results is striking: mentions online map closely to this week’s polling numbers.

Besides “Old Stock” Canadians, what inspired the most action on Twitter among political influencers? And who caused the activity?

Mulcair wins on living wage, child care and housing costs, sparking 53 tweets per minute at the 9:02 mark. Close behind topics were the Syrian refugee crisis and Canada when compared to the global economy. 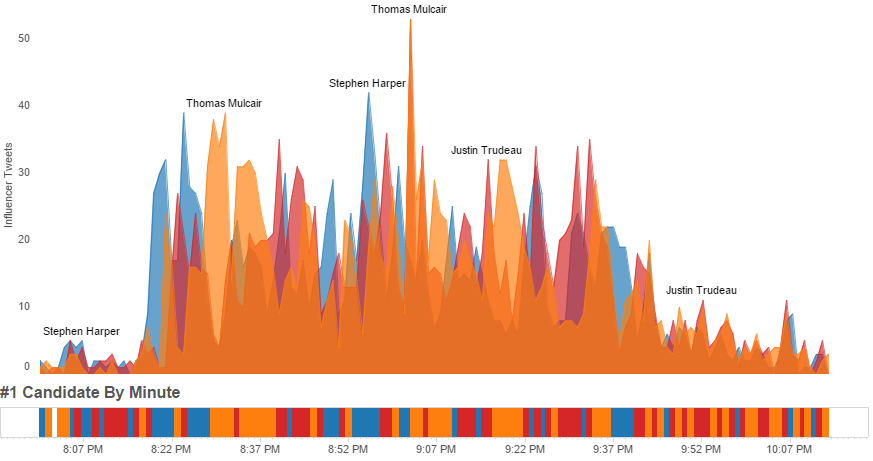 Candidate topics that inspired the most action on Twitter

What does this tell us? Maybe it’s reassuring in some way, to see signs that internet activity mirrors polling activity, at least during this debate. To a greater degree it sets us up to make predictions based on public interest, see what inspires or provokes, or reveal who among our candidates grabs our attention. It most certainly reinforces that the Web is a brilliant focus group, a mirror of our true selves, even if the motivations for what we do online are unknown.