The legalization of cannabis in Canada is uncharted territory and Canadians are just trying to understand it in the best way we can, by comparing it to things we know: Prime Minister Justin Trudeau, hockey, and famous rappers.

On October 17, 2018, recreational cannabis becomes legal in Canada. This date is a popular topic not only among Canadians, but across the globe. Our data and analytics team specializes in social listening and network mapping, and with all the buzz around the legalization of cannabis in Canada, naturally, we were curious to see what everyone had to say.

We collected and analyzed 63,212 tweets from Canadian Twitter accounts over the last year to create a social network map to determine the topics and drivers of conversation related to the legalization of cannabis (more information on our methodology can be found at the conclusion of this post). We named each of the communities (or “Teams”) contributing the highest percentages of conversation, as well as their top influencers (or conversation drivers) based on the topics or themes they discussed. Here is what we found: 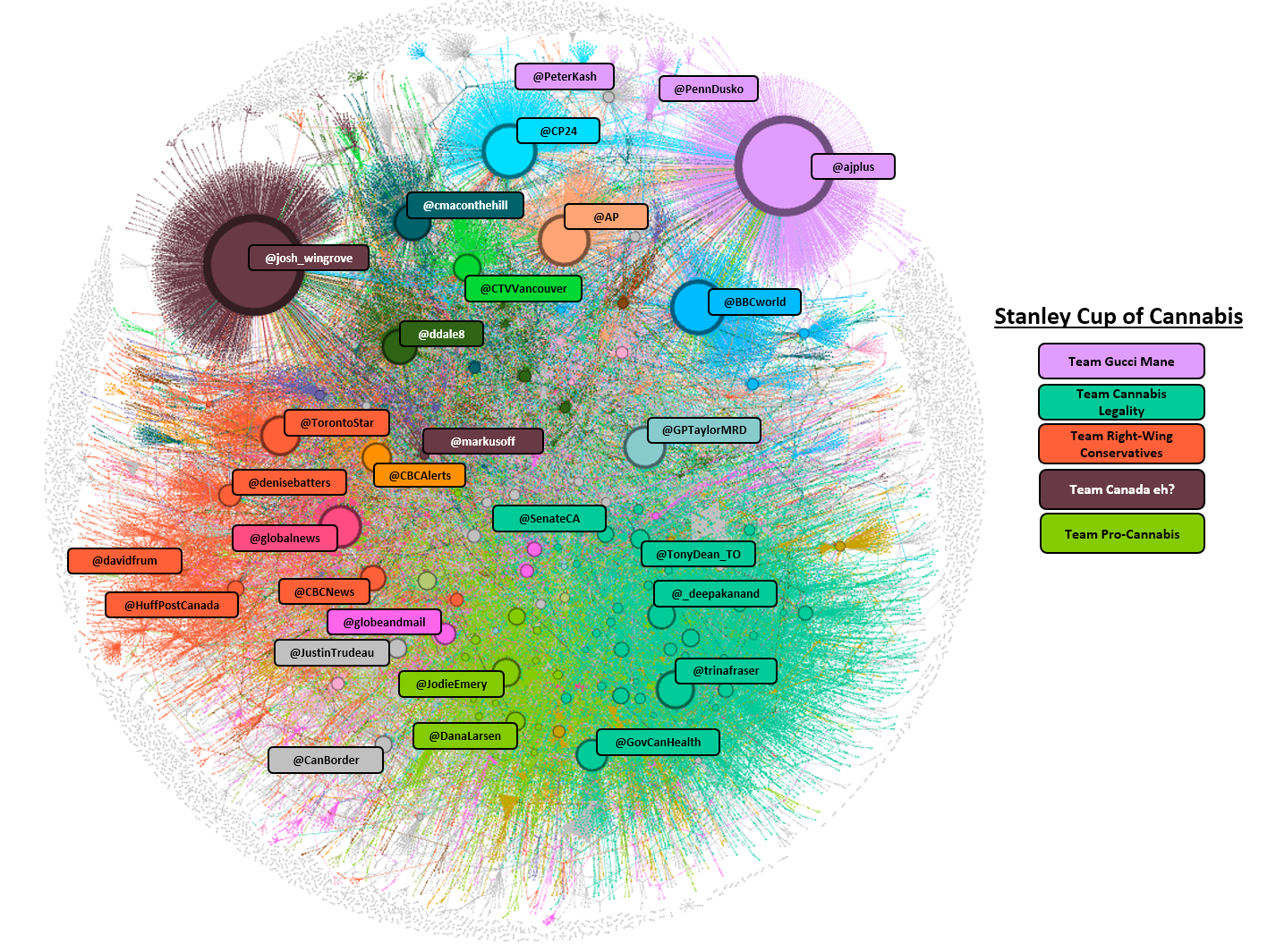 People on this team are interested in all things related to cannabis legality, specifically the Cannabis Act (Bill C45), the age that individuals can purchase cannabis, and the geographical and larger socio-economic impacts. These individuals disseminate information and announcements relating to cannabis and discuss the transition from the pre-legalization market into the legalization market, typically focusing on the importance of including existing market participants into the new industry. 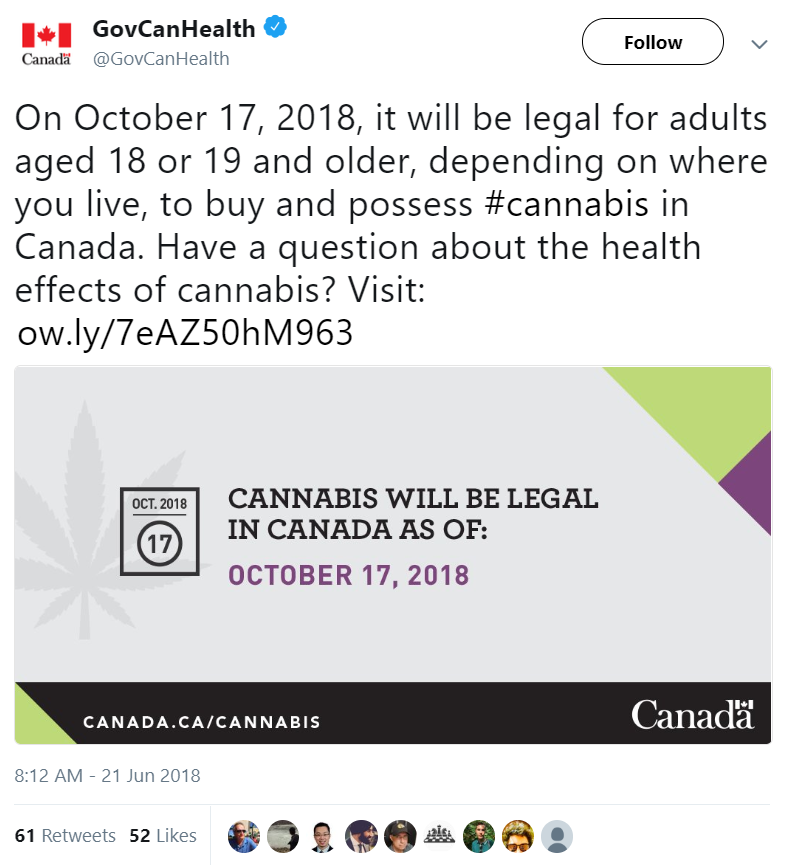 People on this team tend to veer to the political right covering topics related to U.S. President Donald Trump, Russia and President Vladimir Putin, and children and cannabis. The general concern was for children and teens, specifically arguing that increased cannabis use, equates to increased teen use.

Senator Denise Batters expressed concern that the Hockey Canada logo and the Health Canada cannabis logo were too similar, which would subliminally entice young people to smoke cannabis, but people responding to this tweet seemed to think the connection was far-fetched. Some influencers ridiculed Trudeau declaring that he is incompetent and rushing legalization to meet his political deadline. Others commented on the impact that legalization of cannabis in Canada will have on Canada-U.S. border relations, while others circulated information about Russia’s opinion that Canada’s cannabis legalization is a breach of international legal obligations.

Note: Although @HuffPostCanada, @CBCNews, and @TorontoStar appear in the "Right-Wing Conservatives" conversation, we are not implying that they are right-wing media outlets. The map shows that several right-wing conservative accounts share similar content. 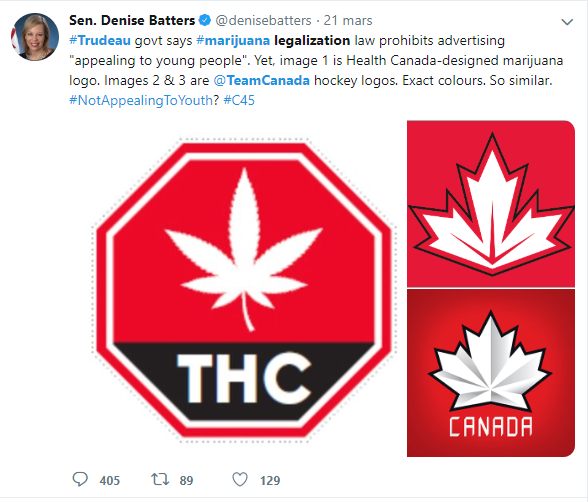 This team has ties to the entertainment industry and most of their commentary takes the form of jokes or memes about rapper Gucci Mane and another sports reference about “Canada being up 2-0 in the finals”. Gucci Mane is a highly mentioned account, as most users jokingly proclaim that he is responsible for the October 17th legalization date. This stems from his user name @gucci1017 and his 1017 Brick Squad, which is a rap group led by Gucci Mane. 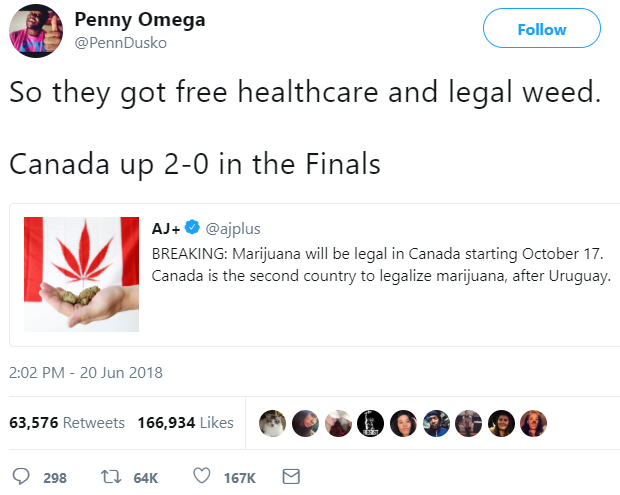 People on this team are critical of various elements of cannabis legalization. However, their critiques are positioned within memes and sarcastic tweets and manifest a humorous aura. One example is the circulation of a 420 event to commemorate the illegal cannabis market. This event critiques the appropriation of stoner culture by big banks. Specifically, the most shared tweet in the entire Canadian cannabis conversation was written by Bloomberg reporter Josh Wingrove, joking that the government of Canada compared the legal size of micro cultivation to a hockey rink. 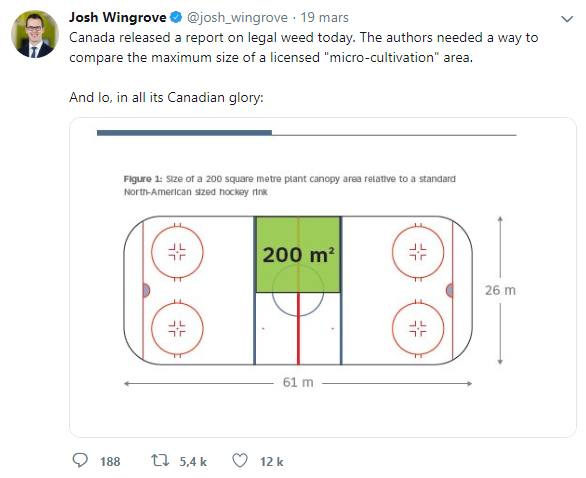 The main influencers in this community could be considered cannabis advocates. This team is supportive of cannabis use, but critical of the exact form of legalization in Canada. This community takes a more serious approach than Team Canada, eh? The key discussion topics include changing the stigma around cannabis, Health Canada’s failure to post regulations online, the government’s failure to deal with pardons, banning the export of cannabis products, and generally the form Trudeau has chosen to pursue legalization, which created an opening for big business to gain a monopoly. 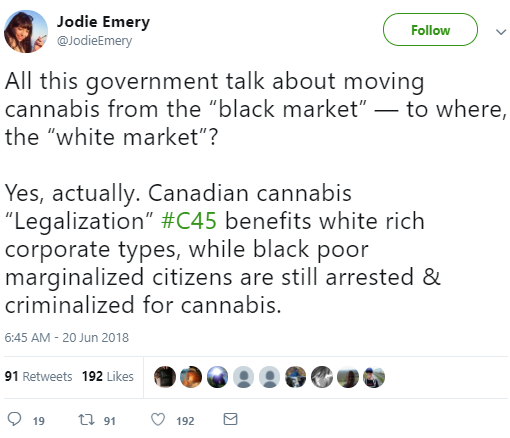 Our take away from all this?

Canada is the first G7 nation to legalize cannabis, which leaves us with lots of questions, concerns, confusion and excitement. To better understand this event, we communicate with each other digitally and in-person, and we digest complex material by comparing it to things that are familiar, and in some cases, funny. When we looked at the Twitter conversation we saw Canadians connecting legalization to Trudeau, hockey and famous rappers in attempt to better understand the space we find ourselves in.

This leaves us with one final question: Drake, where you at?

If you’d like to get a better understanding of online communities and conversations surrounding topics important to your organization, please reach out to our Research experts to learn more. 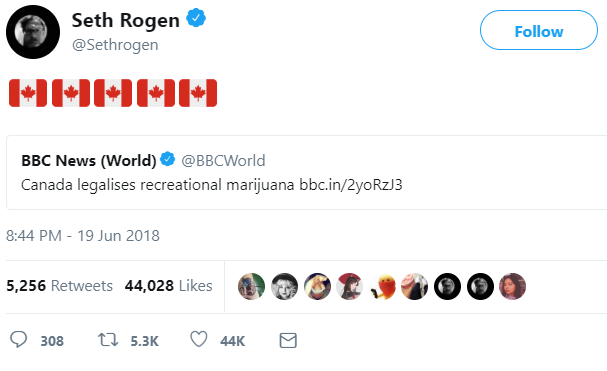 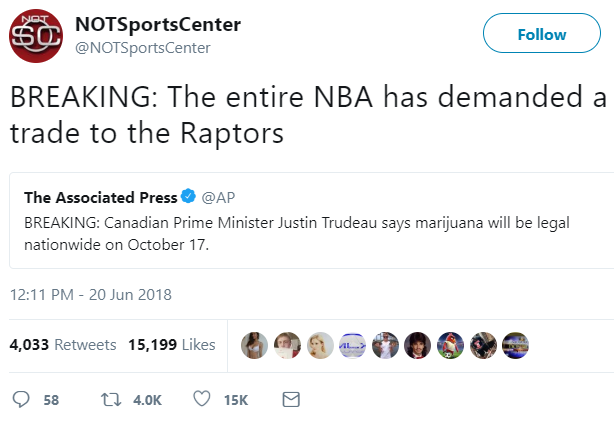 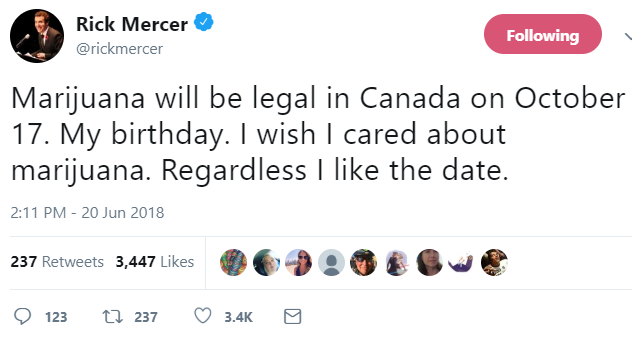 Social Network Mapping Methodology: Using Twitter data combined with statistical and graphing software, we analyzed online conversations around the legalization of cannabis in Canada to create a social network map. This map allows us to understand the connections between individuals and organizations discussing “cannabis” and “legalization” in Canada. It also allows us to identify sub-communities within the overall conversation. The nodes (or circles) in the network are twitter accounts of individuals or organizations discussing cannabis in Canada; the bigger the node, the greater amount of influence or contribution the account has on the overall conversation. These nodes are connected to other nodes based on engagement with other accounts. The nodes are colour-coded based on accounts retweeting or sharing similar content, thus creating communities of accounts discussing similar topics and sharing similar views.

Why marketers should be thinking about cannabis even if they’re not selling it
October 12, 2018